Abortions in Angora Goats may occur at any stage of pregnancy and may have a number of causes. The foetus may be born dead or alive. Probably the most important cause of abortion after day 90 of pregnancy is a nutritional energy deficiency. https://www.angoras.co.za/page/pregnant_and_lactating_ewe#47

Oestrogen when grazing on certain pastures may also potentially cause abortions as well as ‘domsiekte’ and certain mineral deficiencies.

The hypothesis that the abortion phenomenon was heritable was first proposed by van Heerden (1963,1964). Van Rensburg (1965) subsequently confirmed this hypothesis when he found, on small numbers of goats, that mohair production characters (with a fairly high inheritance) were linked with abortion. 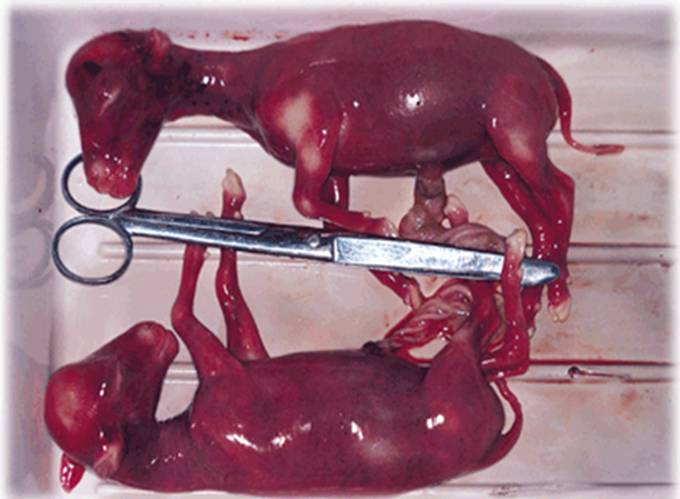 Enzootic abortion (chlamydiosis) is a contagious disease in Angora goats and sheep  caused by Chlamydia psittaci. Outbreaks are usually seen a year or two after new sheep or goats were introduced onto a farm. After the initial outbreak the abortions are then usually  just seen in the maiden ewes. The abortions are more likely to be seen under intensive rather than a veld grazing environment.

The organisms localise in the epithelial cells of the mucosa of the small intestine and then spread via the blood and lymph vessels. When the organism invades the placenta the damage can result in embryonal death, resorption, mummification or abortion. Less extensive damage results in premature or weak full-term kids.

Chlamydia is usually spread during kidding and is transmitted when goat ewes are grazing plant material that has been contaminated by afterbirth or uterine fluid.  Venereal transmission is also possible when rams with infected accessory sex glands transmit C. psittaci in their semen.  The infection can remain dormant (carrier state) in the ewe kid until she aborts for the first time. The disease may also flare up when carrier animals become stressed.

Flocks infected for the first time may have up to 70% abortions. These can occur as early as 3 months into pregnancy where the foetus may be resorbed instead of being expelled. After the initial abortion ‘outbreak’ abortions may then be as low as 5% in the flock and often go undetected.

Small weak kids may be born that die soon after birth. Kids can survive and carry the disease. The ewe at no time becomes ill although Chlamydia can be the cause of infectious opthalmia - see  https://www.angoras.co.za/page/opthalmia#120. It is unlikely that the same ewe will abort again due to Chlamydia  and hence the reason why that after the initial outbreak abortions are then often  seen in maiden ewes on a contaminated farm.

Chlamydia psittaci can cause a number of disease conditions.

Oil-based, inactivated vaccine is produced by Onderstepoort Biological Products (OBP) to prevent abortions caused by chlamydial infection. It is essential to vaccinate before the breeding season, because the vaccine will not give protection against abortion once the foetus has been infected. The ideal time is 4 to 6 weeks before the breeding season.

What to do during an outbreak?

Ewes tested positive that are then vaccinated may help decrease the shedding of chlamydia.

The duration of immunity after vaccination in goats in South Africa has also not been tested.