The brown stomach worm has major health implications for Angora goats especially those grazing on lands.

What time of the year is worse?

The major impact of brown stomach worm is from February to June and again October to December. When sheep and goats graze together goats are always more heavily infected. 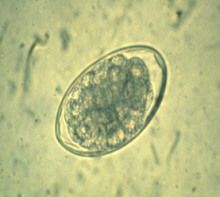 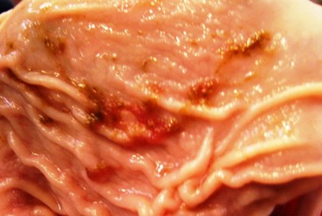 Eggs passed out in faeces  can hatch at temperatures even as low as 5C.The Larvae develop to stage 3 larvae 5-6 days after hatching ( at optimum temperatures of 22-27C and more slowly when cooler). The infective larvae can survive on pasture for up to 14 months and are capable of overwintering in cold conditions.

Infective larvae can actively move off the dung into pasture up to a distance of 50 cm.

The larvae in the abomasum can become arrested (hypobiotic, dormant) in the nodules for several months, especially in autumn and early winter, to emerge only during the next spring, when environmental conditions are more favourable.

How does the brown stomach worm cause diarrhoea?

Larvae are the most damaging stage. The cells of the stomach proliferate trying to heal the injuries caused by the burrowing and feeding larvae. The damaged cells can't produce acid. The consequence is that the pH of the abomasum rises up from 2 to almost 7, with dramatic consequences. Secreted pepsinogen can't be transformed into active pepsin, which hinders protein denaturation and subsequent digestion of feed material in the intestine. The increased pH also leads to bacterial proliferation in the abomasum compounding the diarrhoea.

How does oedema ‘waterpens’ ‘swelsiekte’ develop due to the brown stomach worm?

The brown stomach worm in effects result is a decrease in protein and especially albumin levels ( a blood protein). Loss of proteins through diarrhoea and reduced uptake from the intestine has to be compensated with increased food intake, which is very difficult because the affected animals lose its appetite.

This decrease in albumin decreases the oncotic pressure within the blood vessels leading to oedema.

Adult worms do suck blood (3-4 weeks after the initial infection) which results in the reduced blood count but anaemia is not as pronounced at in the case of wireworm.

Abomasitis with ‘ostrich leather’ appearance and ulceration of the mucosa.

The brown stomach worms are so small that they are hardly visibly with the naked eye.