Conical Fluke (Paramphistomum ) although rare, has been reported in Angora goats and can occur on planted pastures where water is sourced from dams and rivers and where goats drink and graze around open water sources. The flukes appear light red, pear-shaped, 5 to 13mm long and 2 to 5mm wide. The flukes are often found incidentally on post mortem in the rumen with immatures forms in the small intestine.

Dr Snyman (Grootfontein) confirmed cases in 2-4 tooth Angora that had been on veld and then irrigated pastures where the water was from the Fish River and Orange River schemes. 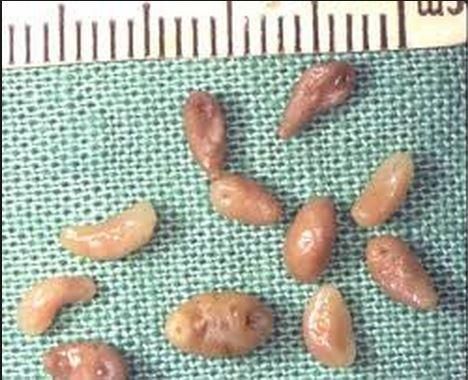 Immature flukes attached to the wall of the small intestine cause inflammation. Digestion and absorption are impaired causing diarrhoea. Appetite is depressed and goats lose weight and become weak. Bleeding may occur which over time may cause anaemia. This may result in ‘swelsiekte’ and goats may die.

Immature flukes found in abomasum and proximal duodenum. These are  just visible and look like the size of sugar granules. Sub-cutaneous fluid accumulates , especially ventral neck, head, body and legs as well as between muscles.

Fluid is found  in the  abomen and thorax and lungs.

Life cycle of the conical fluke:

The adults can live for years in the goat.

Eggs pass in faeces and the miracidium hatches in 12 to 17 days and swims free in water before penetrating a snail.

Cercariae which develop and mature in the snails, are shed, and encyst as metacercariae on vegetation.

The metacercariae may live on pasture for about three months. Goats are infected by ingesting cysts on grass. Digestion releases metacercariae in the intestine where they attach and mature for 6 to 8 weeks before migrating forward to the rumen.

Avoid open water sources. Snails live on wet pasture, which can be drained or fenced off.