The Angora goat is highly susceptible to Heartwater (HW) so it is concerning to see the disease spreading from the marginal areas due to the favourable seasons we have been having. The ‘Bont’ tick Amblyomma hebraeum has been increasing its distribution range and outbreaks have occurred this autumn in the Jansenville district. The ‘bont’ tick has also been identified on game species within a few kilometres of Graaff- Reinet. 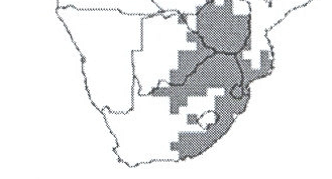 The ticks spend 98% of their life cycle off the host and so are affected by environmental conditions (vegetation, temperature and rainfall) more than host distribution. Hosts include livestock and wildlife (more importantly kudu, scrub hares, guinea fowl and tortoises). The ticks do not tolerate cold weather so tend not to survive longer than a season in a newly introduced area but are more likely to remain in mountains and kloofs. In endemic areas only 7-10% of the ticks carry the Ehrlichia ruminatium organism which causes HW. Larvae and nymphs suck blood from carriers and then drop off and develop into nymphs and adults respectively (4-6 weeks). They then attach to another host and transmit the disease (3 host life cycle). Preferred sites of attachment in the goat are the belly and groin (sometimes peri-anal area) while the nymphs are found on the feet and legs and larvae are found on the feet, legs and ears.

When a tick transfers ER to a susceptible goat the organism replicates every 4 days. The numbers or ER increase to a point where they are high enough to cause clinical signs or death. The time from the tick bite to a rise in temperature (>40C) is usually 7-35 days (average of 14 in the Angora goat). The disease in Angoras usually progresses so quickly that they often collapse, go into convulsions and die without the farmer seeing other clinical signs. The first signs are a poor appetite, lethargy, fever, lagging behind the flock and as the condition deteriorates the goat can have difficulty breathing and may stand with its tongue protruding, bleat, the tail and eyelids can twitch and usually lies down. Chewing movements can sometimes be seen. The goat starts paddling with its leg and its head pulls back before dying.

On post mortem variable amounts of straw or blood tinged fluid can be found in body cavities, especially in the thorax and around the heart. This is due to the parasite invading the cells of the blood vessels, organs and brain leading to leakage of fluid. Bleeding on the muscle walls of the heart can be seen and the lungs are usually congested and foam can be  found in the trachea. In many cases in Angoras death may be so quick that few post mortem changes are present.  A definitive diagnosis is made by checking brain samples under microscope after staining with a special stain (Giemsa). 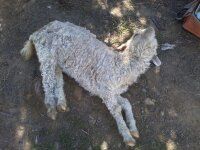 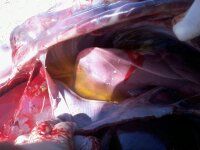 If treated early there is a good chance of recovery but once severe signs are seen treatment is usually not effective. Tetracyclines, especially oxytetracycline is most effective. In the past a dose of 5mg/kg was used which is now seldom effective and a higher dose rate 10-20mg/kg is used. Doxycycline at a lower dose of 2mg/kg has also been effective. Sulphonamides have been used where oxytetracycline has failed. In addition betamethasone, prednisolone (not pregnant ewes) or DMSO as well as diuretics have been used when treating valuable animals. Please discuss treatment with your local vet.

If you have never had Heartwater on your farm but you are in a fringe area and suspect HW deaths WHAT SHOULD YOU DO?

If HW is confirmed on Post Mortem then an on-going management strategy will need to be discussed with your local or SAMGA vet.

Remember to quarantine animals that are being introduced onto your farm from HW areas. They should be blocked and treated for ticks.

(Nothing to do with HW but new introductions should also be checked for worm egg counts and dosed accordingly. Faecal samples should be checked again 10 days after dosing for resistant strains of worms being introduced onto your farm.)

‘Blocking’ by injecting tetracyclines follows one of two strategies.

There is concern as to the development of resistance to tetracyclines by the HW infection.

The only vaccine that is currently available is still the cryopreserved sheep blood that contains the HW infection (Ball 3 strain) that involves intravenous administration and then a blocking treatment. A vaccine is needed that does not cause the disease and is easy to administer.

This has resulted in the exciting development of the live attenuated vaccine which has progressed to the point of field trials by the Animal Research Centre - Onderstepoort Veterinary Institute (ARC-OVI). Dr Latif is the project leader with co-workers Spickett, Josemans and Troskie.

To get to the point where we are today has involved a great deal of work by ARC-OVI:

(A very brief idea of what these trials have involved to date):

There appears to be light at the end of the tunnel as far as HW control is concerned.