Pasteurellosis is often used to describe the disease ‘pneumonia’ or ‘bontlong’ and occurs more commonly in late autumn and early winter.  Losses are usually 2-8% but 10-50% can show signs of the disease.

Pneumonia is a disease of complex aetiology, involving interactions between a range of micro-organisms and the immunological and physiological responses of the host. Pasteurella (Manneheimia) haemolytica is considered to be the main bacteria.

Manneheimia haemolytica is divided into 2 biotypes ( A and T) and 16 serotypes.

The dominant serotypes with pneumonia have been 6,2,1 (in that order)

Biotype T is has also now been called Pasteurella Trehalosi and further renamed Bibersteinia trehalosi. More research has been conducted in sheep where  Pasteurella ( Bibersteinia) multocida has 5 types A,B,D,E (type C was not a separate type so was removed).  Sheep are affected by type A or D.

In goats Chlamydia psittaci  ‘Enzootic Abortion’   organisms have also been implicated as a predisposing cause.

In Angora goats less is known about the agents involved. In cases where culture and |ID have been conducted when the SAMGA vet has investigated deaths theses have all been Manneheimia haemolytica (not typed).

Bacteria are mostly NOT the Primary cause of Pneumonia – rather, they aggravate inflammation and increase the risk of mortality

How does this lead to pneumonia?

The Pasteurella bacteria occurs in the normal environment of the respiratory tract and proliferation and disease consequences occur under certain predisposing factors.

Any stress (environmental or social), insufficient (too late, too little or of poor quality) colostrum intake, or any nutritional disturbances like a negative energy balance in ewes, or anti-oxidant deficiencies like Zn, Se and Cu leads to a deficient functioning immune system… which results in.

Strictly speaking this is not an etiological diagnosis simply because “Pasteurella” was NOT the initiator, or trigger for the Pneumonia.

At low levels of invasion a purulent lesion develops which may resolve if the body’s immune system is effective. When the antibacterial defences in the lung are overwhelmed, and bacterial proliferation occurs, the result will be pneumonia. The lesions never resolve completely and fibrous scars remain.

How does this work at cellular level?

The toxins produced by Manneheimia haemolytica ( Lkt and LPS) stimulate the migration of white blood cells into lung tissue and result in the often fatal inflammation in the lungs.

This ultimately leads to a fibrinous Pneumonia…and should the goat survive this, the lung lesion is permanent – as often seen on post mortem examinations.

Severe fibrinous pleurisy with adhesions between lung and thorasic wall may occur as seen in the photo’s below. 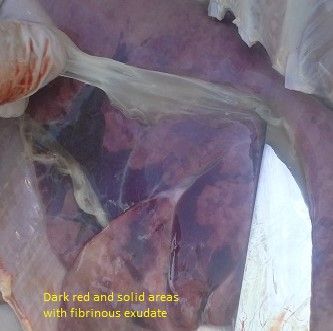 Fibrinous exudate is often found on the pericardial sac. The lungs are dark red and solid and feel thick on palpation- mainly in the antero-ventral lobes of the lung. Circled in red in the diagram.

Haemorrhages on heart muscle wall may be seen. The liver and kidneys are congested and appear dark red.

Grey hepatisation (‘bont long’) of the antero-ventral lobes with fibrinous adhesions as seen in photo below. 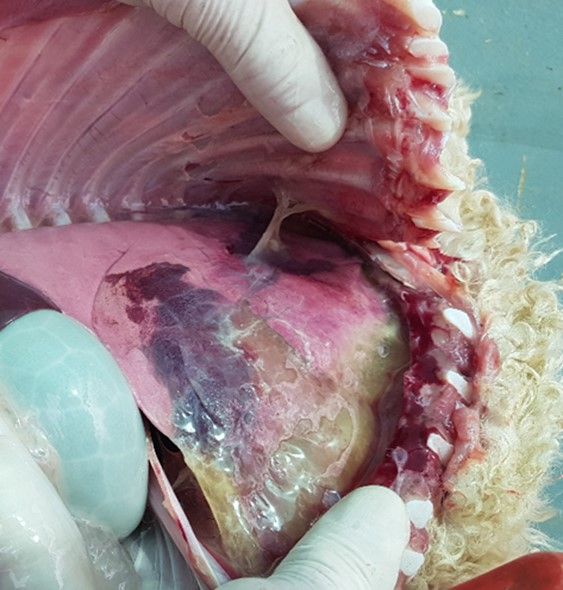 Long acting tetracyclines , sulphamezanthine and penicillin has helped  but treatment with antibiotics has often proven unsatisfactory. Research indicates that a follow up treatment 4-6 days later is advisable when using antibiotics to achieve better results.

Some farmers who had problems with pneumonia have found dosing ‘Pennville triple sulpha’ at a dose of 5g/litre (dosing kids 8ml and adults 24mls) during times of expected outbreaks has had an prophylactic effect.

The key to pneumonia is prevention.

Good farm management includes management of the variables that the mohair producer has control over.

For the other factors the producer has no control over Vaccination forms an important part of risk management.

Theoretically a COMPLETE Pneumonia vaccine would have to include antigens against all pathogens, viruses and bacteria, which play a role on Pneumonia . Such a vaccine simply does not exist currently.

Cross protection: Manneheimia haemolytica type A1 affords cross-protection against the type A2 and A6 strains.  Type A2 is a common complication in Pneumonia and Mastitis in sheep and goats.

The science is in favor of the cell-free supernatant vaccines compared to bacterins.

Other forms of Pasteurella disease:

Systemic Pasteurellosis due to infection with P.haemolytica  biotype T can effect young goats between 5 months and a year. Prevalence is most common in autumn with the same predisposing causes.

The injured mucosa  of the alimentary tract (such as acidosis and brown stomach worm) can serve as an entry for the biotype T as emboli into the blood. Most emboli end up in the capillary beds of the lung. Death occurs as a result of endotoxeamia.

Petchiae and eccymoses in subcutis of pleura and peritoneum. Cranial, cervical and mesenteric lymph nodes are oedematous and haemorrhagic. Erosions and ulcerations of the pyloric region of the abomasum may be seen. Blood stained froth in the trachea and bronchi. The liver may show yellowish-white areas of necrosis 0.5-5mm diameter.

Kids under 2 months at greatest risk from P.haemolytica biotype A

Non-specific petechia on serosal surfaces, fibrinous pleuritis and pericarditis, congestion of the lungs

Blue udder is predominantly caused by the bacteria Pateurella haemolytica but Staphlococcus aureus and Corynebacterium spp can also be implicated.  Environmental contamination is an important source of infection and distended udders are predisposed to as suckling kids cause trauma.   Kids can transmit the infection to other ewes when they try to suckle off them.   Up to 5% of ewes in a flock can be affected.    The affected udder becomes firm, swollen and reddish to bluish in colour.   Ewes can die after 2-3 days or the inflammation may subside, developing later into an abscess of the udder.  Treatment is with oxytetracycline injectable, intra-mammary treatments and stripping of the udder.   The affected part of the udder is unlikely to be saved unless treated very early in the disease course.