Farmers are well aware of the incidence of the disease in Dorpers and Merino sheep but the disease can occur in Angora goats.

PizzleRot’, ‘Sheath Rot’, ‘Peestersiekte’ ‘ulcerative vulvitis’ can be caused by Corynebacterium renale and Mycoplasma mycoides although other bacteria have been implicated.
Orf lesions can also develop around the prepuce and vulva.

The condition is transmitted from ram to ewe to ram but can occur in young rams that have never been with a ewe.
This disease is characterized by ulceration and inflammation of the glans penis and the prepuce, as well as the vulva of affected ewes. The first signs observed may be swelling and bleeding of the prepuce or vulva. Upon examination ulcers are seen which bleed readily when manipulated. The condition may spread within a breeding flock to involve a considerable proportion of the animals. The pregnancy rate in affected flocks is depressed. 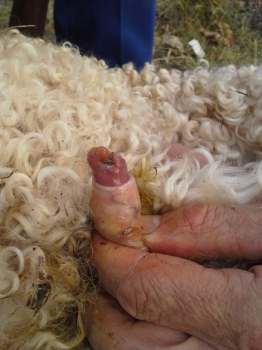 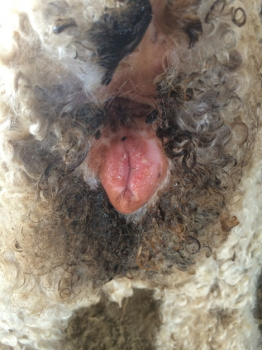 When protein intake is high, urea levels in the urine increase. The bacteria convert this to ammonia (cytotoxic) which irritates the penis and prepuce or vulva of ewes. The condition is found more commonly in ‘kapaters’. Isolating the affected goats and treating with appropriate antibiotics is usually effective. Kapaters can be affected more as penis not developed so urinate into prepuce.
Disease starts as small ulcer which develops at the external orifice of the prepuce. Scabs develop over these ulcers. The inner prepucial and penile membranes become involved. The tissue may slough off producing foul smelling pus and necrotic material in the prepuce.
Potentially the prepuce may become blocked with material and swell. The goat may have difficulty urinating and develop uraemia and potentially die.
Rams have fewer prepucial lesions and more on penile mucosa

Prevention:
• Isolate
• Eliminate conditions under which bacteria proliferate
• Clip hair around pre-putial opening
• Reduce concentrate (protein) in diet
• A shortage of zinc has been associated with the condition. 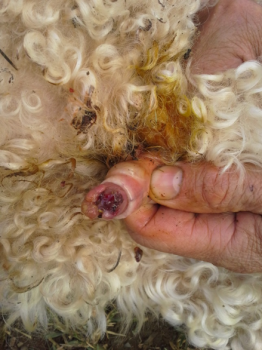 It is important to check rams for signs of the disease especially if they have received additional concentrate feed before being added to your ewes for mating.
Treatments
Affected rams should be removed from the flock and isolated. Affected ewes should also be maintained separately.
• Sheath wash with Acryflavine glycerine
• Long acting antibiotic (Draxxin) and C. renale is usually sensitive to Penicillins
• With the ram in a sitting position, the penis is pulled out and sprayed with an antibiotic aerosol.
• Rams can be dosed rams with ammonium chloride (1-3g in water 3x daily)
Ewes vulva can be treated with Acryflavine glycerine and long acting antiobiotic (Draxxin or Penicillin) but tend to clear themselves after a cycle.
Recovered animals appear to have normal fertility. Before using a recovered ram the next season he should be treated with Draxxin before being put to ewes.