Rabies in Angora goats is extremely rare but it is possible that they can, in the same way as humans, become accidentally infected.

There are two main cycles of Rabies in South Africa.

Other animals (Angora goats) and humans can become accidentally infected by either of these two cycles through saliva usually involving a bite.

Rabies infection is fatal in all species and no species has a carrier state where virus is shed in the absence of clinical signs or imminent clinical signs.

If rabies is suspected in any animal do not handle.

Contact your State Vet or Local Vet for advice.

The suspected animal will need to be killed and a brain sample taken for diagnosis.

How does Rabies spread?

Rabies virus gains entry into a new host by introduction of virus-containing saliva into a bite wound. Entry may also be gained by saliva contamination of the mucous membranes of the mouth, eyes and nasal passages.

Livestock are often exposed when they investigate this new animal in their surroundings. Because people can be exposed to rabies by contact with wild or domestic animals, avoid "suspicious" animals.

It is vital that all farm cats and dogs are routinely vaccinated to reduce the risk of humans contracting rabies. 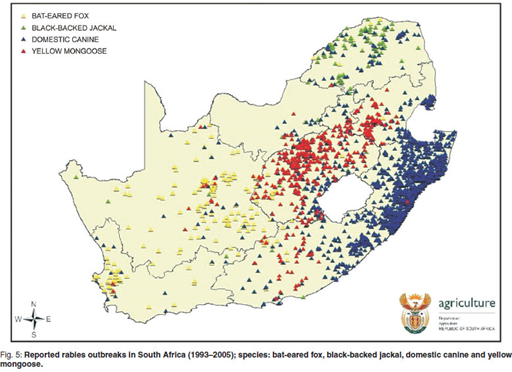 (Incubation period of one to five days)

Clinical signs reported in confirmed rabies cases in goats from September 1987 to December 1999.

Symptoms in other animals

Cases of rabies in sheep appear more similar to rabies in cattle with an average incubation period of ten days.