TICKS and  the ANGORA GOAT

A brief overview of ticks that can be found on Angora goat and the diseases transmitted by these ticks.

Called ‘bont ticks’ because of their brightly coloured patterns.

Sites of attachment on the Angora goat: The adults favor the belly and groin areas of Angora goats but can also be found in the peri-anal region. The nymphs are found on the feet and legs while larvae occur on the feet, legs and ears.

Distribution in Angora goat farming areas: Eastern and coastal bushveld areas of the eastern cape where it is warmer and moister. If carried into non endemic areas they can survive in hills, valleys and kloofs. The bont ticks have been found north of Jansenville and within kilometers of Graaff-Reinet.

Life cycle: The Bont tick is a 3 host tick.

The ticks spend 98% of their life cycle off the host and so are affected by environmental conditions (vegetation, temperature and rainfall) more than host distribution. Hosts include livestock and wildlife (more importantly kudu, scrub hares, guinea fowl, warthogs and tortoises). The ticks do not tolerate cold weather so tend not to survive longer than a season in a newly introduced area but are more likely to remain in mountains and kloofs. The Bont tick can complete its life cycle in 5 months but it can take 3 years. The adults are more prominent in summer, the larvae are more active in late summer and autumn while the Nymphs occur more in winter and spring. The adults and nymphs are “hunters”, scuttling along the ground when a suitable host is in the vicinity, particularly so if the host is already infested with adult male ticks excreting an attraction pheromone.

Diseases caused in the Angora goat:

Other animals effected by the ‘Bont tick’: Adult ticks feed on cattle, sheep, goats and large wild ruminants, particularly giraffes, African buffalo and eland, and also on warthogs and black and white rhinoceroses. Immature infest the same hosts as the adults but also small antelopes, helmeted guineafowls, scrub hares and leopard tortoises. Other organisms transmitted by A. hebraeum are Theileria mutans and Theileria velifera the cause of benign bovine theilerioses. Out of interest there is also an Amblyomma marmoreum ( Tortoise tick) but only attaches to  tortoises.

They are large, very active ticks. They have dark brown bodies and banded legs. 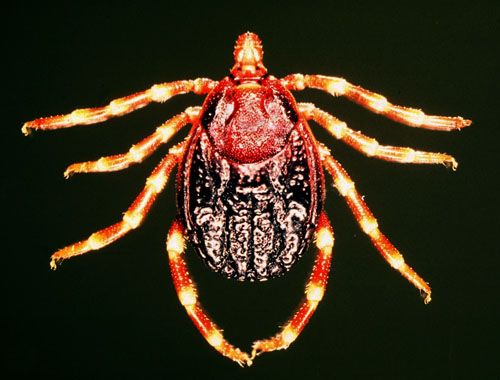 Sites of attachment on Angora Goats: The large, coarse bont-legged tick is usually found around the anus and genitals but can also be found between hooves

Distribution in Angora goat farming areas: Throughout the Mohair producing areas (drier) but not coastal areas or winter rainfall areas.

Life cycle: 2 host tick, most active in summer but throughout year if the conditions are good.

Similar to above but much paler legs

Also causes tissue damage as above 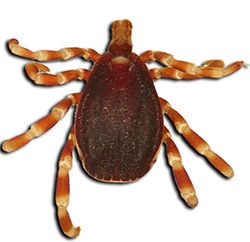 Distribution in Angora goat farming areas: Different to the above in that it also occurs in the winter rainfall mohair producing areas.

Other animals affected by the bont-legged tick:

The adults are “hunters” and scuttle along the ground when they detect a host in their vicinity.

Certain strains of H. truncatum contain a toxin in their saliva that causes sweating sickness, an acute dermatitis in cattle, particularly calves. The condition can be reversed when the tick, often attached to the tip of the tail, is removed. When the ticks infest dogs they tend to cluster at one site and can cause severe skin necrosis. The long mouthparts cause tissue damage in cattle and sheep and secondary bacterial infections may lead to abscess formation. Its attachment to the lower legs and feet of lambs can lead to lameness. Ticks of the genus Hyalomma can transmit Crimean Congo Haemorrhagic fever virus to human, and H. rufipes is thought to be the chief vector of this virus in southern Africa. Humans can become infected with this virus via tick bites or by crushing infected ticks, or from the blood of infected animals, which exhibit no clinical signs, but are infective for about 14 days after being bitten by an infected tick, or by coming into contact with the blood of infected persons. Hyalomma truncatum and H. rufipes also transmit R. conorii to humans.

Sites of attachment to Angora goat:

Adult ticks attach under the tail around the anus and sometimes can be found in the axilla, groin and on sternum.

The Nymphs can be found deep down in ear canal.

Most active in summer.

Other animals effected:: Adults prefer horses, zebras, elands, cattle and sheep. Larvae and nymphs utilise the same hosts as the adults and also scrub hares and various antelopes. The adults are found on the hairless area around the anus as well as the inguinal region of equids and sheep. The immature stages attach deep in the ear canals. 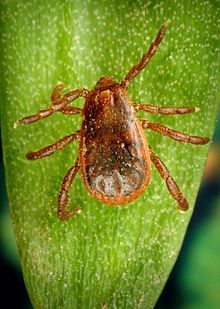 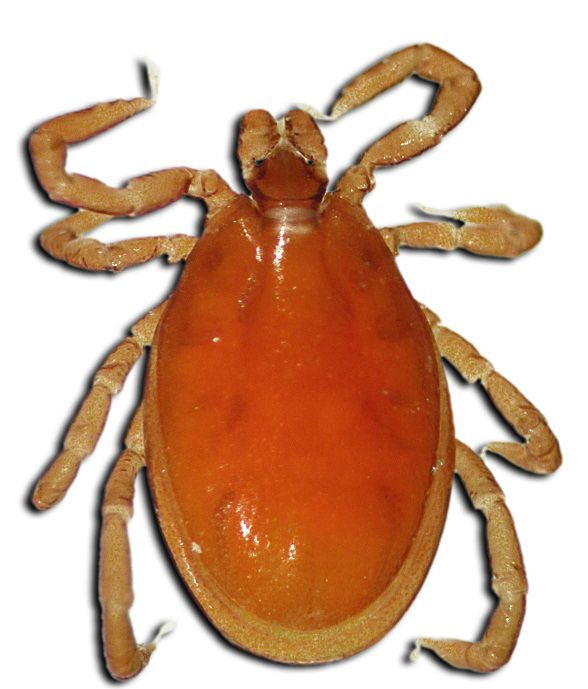 Sites of attachment to Angora goat: ventral body and neckline.

Outbreaks are often associated with sudden drops in temperature or cold, damp overcast conditions. Recovery occurs after removal of the tick/dipping. 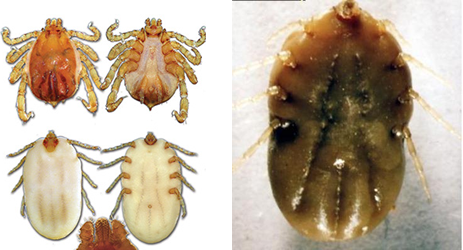 The name ‘Blue tick’ can be a bit misleading as other tick females can be more ‘blue’ than Boophilus. The hind end of the nymph is however a bit more bluish in colour:

Distribution in Angora producing areas : The Blue tick occurs where rainfall >380mm so are generally absent in the central Karoo and are found more towards the coastal regions.

Life cycle: The Blue tick is a one host tick.The ticks are active throughout the year where the climate is warm enough, with a peak in abundance during spring and another during late summer and autumn.

Disease of the Angora Goats:

The Blue tick and other animals: Cattle are the main hosts and involved in the transmission of many cattle disease conditions. This tick transmits Babesia bigemina to cattle (Redwater)  It also transmits Anaplasma marginale to cattle (Gallsickness), and Borrelia theileri, the cause of spirochaetosis, to cattle, sheep, goats and horses. Eland can be asymptomatic carriers of A. marginale and could thus serve as a reservoir of infection for domestic cattle. Cattle, impalas, eland, bushbuck, greater kudu and also horses and zebras are hosts of the Blue tick..

The Spinose ear tick was introduced from America in 1898. The larvae and lymphs feed deep in the ear canal. Adults are not parasitic so not found on the goat.

Life cycle: 1 host tick. Eggs hatch after 3 weeks; larvae feed in deep canal.The nymphs once fed drop off and crawl under stones, cracks and develop into adults. It can persist in empty kraals for 2 years. The immature stages may remain in the ears for months.

Disease caused in Angora goats:  The tick causes irritation and can cause damage to ear drum and auricular nerves. Secondary infections can develop.