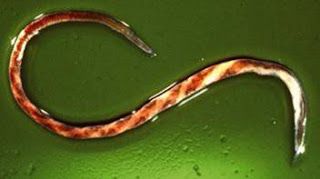 Haemonchus contortus known as ‘Wireworm’ or ‘Haarwurm’ are one of the most important health issues facing the Angora goat industry.

Wireworm occur in the abomasum of the goat and the females worms can easily be identified by the white ovaries twisting around the blood filled gut and so called ‘barber’s pole’. They

are usually 2-3cm long. If a post mortem is delayed longer than 24 a day the worms may no longer be visible.

The blood-sucking nature of wireworm can  cause the loss of 0.05ml of blood a day. The number of worms in the  Angora goat abomasum determines the amount of blood loss a day

(See table below). To get an idea of the number of worms present in the abomasum a faecal sample can be checked for the number of eggs per gram (epg). 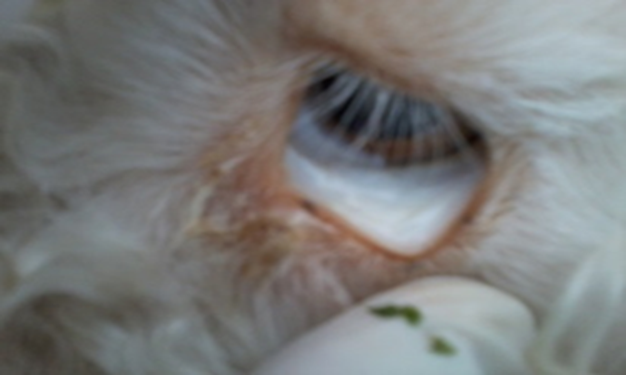 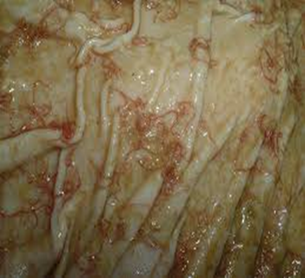 Anaemia caused by wireworm can occur due to haemorrhage from the abomasum wall in per acute infestations. In more chronic forms the anaemia may be aggravated by the depletion of iron reserves which reduced the ability of the goat to manufacture new red blood cells. The blood protein, albumin, becomes reduced resulting in the drop of blood oncotic pressure, oedema and ‘bottle jaw’. Some Angora goats that are chronically infected over months may lose weight and get weaker but not show significant anaemia or oedema.

Immunity of the Angora goat to wireworm

Innate immunity in an individual animal is the inherent ability of that animal to resist infection with worms and is genetically predetermined and inherited.

The immunity of individual animals can be influenced by multiple factors.

Selection for resistance going into the future will be vital for the progress of the Angora industry.

Selection can be done using Faecal eggs counts (repeatability is high) and the FARMACHA system.

An Index system has been trailed with the SAMGA veld rams which could be used.

In the future Genomic selection using DNA markers will likely be used.

(a) The Single Nucleotide Polymorphisms (SNP) chips have proven to have an accuracy (0.5) when selecting for faecal egg counts in sheep. This is higher than traits such as weaning                  weight and fleece weight.

(b) BLUP accuracy in selection for faecal egg counts is even better with certain breeds having an accuracy of (0.63-0.70).

On farm flock selection can be as simple as carrying out Target Selection Treatment (TST) using FARMACHA and marking goats and culling repeat offenders.

Some farmers when selecting in their flocks have simply in effect carried out TST by separating the last lagging, weaker  3rd of the flock arriving at the kraal after being herded. This last 3rd of the flock are check for conjunctival eye colour, dosed and mark these accordingly.

The rise in the adult wireworm population in spring may be due to (i) the relaxation of resistance with the Angora ewes kidding and lactating (ii) the effect of ‘hypobiosis’ where  the L4 larval development is retarded over the winter months and continues its development as the environmental conditions improve in spring. (iii) the infective larvae on the pasture survive more easily as the temperatures rise and moister environmental conditions.

As the summer progresses further contamination results in the higher levels see in late summer especially in weaned kids under stress.

Each female can produce up to 10 000 eggs per day and so pastures and the veld and lands can be rapidly contaminated. The eggs hatch in 4-6 days and L1 stage larvae develops. These larvae feed on the bacteria in the faeces and develop into stage L3 larvae. These larvae crawl up moist vegetation and wait to be eaten by the goat. 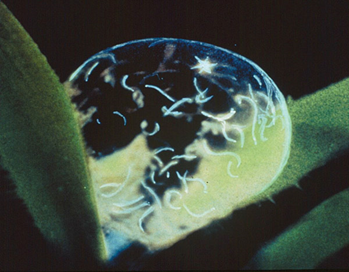 L3 larvae in a droplet to be grazed (photo Dr Kerr)

The larvae are protected by a cuticle but under dry or very hot or frosty conditions do not survive for long periods. For this reason resting camps for 2-3 months helps in worm control.

The Larvae are eaten by the goat move through the 3 stomach to reach the abomasum where the protective cuticle is shed. The larvae moult and develop into the L4 stage within 48 hrs. They penetrate the lining of the abomasum and start feeding on the blood and can be seen as a small blood clot on the abomasum wall. After about 3 days the L4 develop into an adult worm which attach to the abomasum wall and suck blood.

The developmental period is about 18-21 days.

The developmental period of 18-21 days is the reason the faecal egg count reduction test (FECRT) involves taking a faecal sample about 10 days after the anthelmintic has been given -any eggs found then will have to be produced by worms surviving the dose.

It is interesting to note that when Trichostrongylus axei (bankrupt worm) has been present in the wireworm takes some time to establish itself in the abomasum, possibly due to the environment created not being suitable.

The first step in combatting the problem is to determine the current status on a farm. Every farm is different and resistance levels will depend on previous management strategies. Due to the economic implications of roundworms, it is best to find out in as much detail as possible what the situation is on individual farms specifically with regard to the status of roundworm resistance.

To check for dose resistance in a flock, do a Faecal Egg Count Reduction Test (FECRT).

(i) Take a pooled faecal sample from about 5 marked goats. Keep the faecal sample in the fridge and get your vet do a FEC (faecal egg count) within 48 hrs.

(ii)  Dose with an anthelminthic if indicated, recording the product used.

(iii) Take another sample from the same marked goats 10-14 days later and have a FEC done.

Any roundworm eggs that are found in this second sample must have come from worms that survived the anthelminthic dose as it takes at least 21 days for ingested infective L3 stage larvae to start producing eggs. This will indicate if resistance to an active ingredient is present and to what extent.

“Refugia” has proven to slow down the development of anthelminthic resistance by maintaining an anthelminthic-susceptible worm population on the veld/pasture. Drench resistance can’t be prevented but we can reduce the rate of resistance development. Studies indicate that there needs to be at least a 10 fold dilution of resistant eggs to maintain the effectiveness of a dose in a flock.

dosed. Immunity to roundworms varies between individuals so only a small part of the flock is often infested with most of the worms.

A future possibility for improving immunity is the development of vaccines. This has occurred in Australia where a registered vaccine against Heamonchus (wireworm) is available. The vaccine has been effective in reducing egg counts by 95% but the down side is that the vaccine has to be made from wireworm harvested antigens rather than manufactured antigens, so mass production is a problem. The other issue is that the vaccine has to be repeated every 5 weeks during summer.

There are no new drugs scheduled for introduction to the market in the short term. Due to the economic impact of roundworms and with anthelmintic resistance developing means the focus must be on management strategies of avoiding drug resistance and improving the immunity of the Angora goat.

© SA Mohair Growers - 2022 | Links | Haemonchus contortus known as 'Wireworm' or 'Haarwurm' are one of the most important health issues facing the Angora goat industry.