Many Karoo farmers use American aloe ’Garingboom’ as a drought feed.

A study by Grootfontein  indicated that American aloe was able to satisfy 64% of the maintenance requirements of mature sheep, but that the best results were obtained at an inclusion level of 45% in maintenance diets with 55% lucerne. American aloe has a low protein (3-4%) content.

It must be remembered that American aloe contains oxalates which can be toxic in unadapted animals or fed excess amounts. 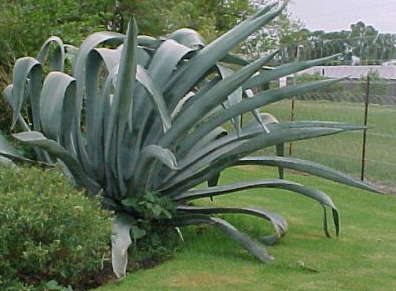 Why can American aloe be toxic?

The aloe contains soluble oxalates which leads to hypocalcaemia and can primarily affect the kidneys.

This is due to blockage and damage of tubuli of the kidneys by Ca-oxolate crystals.

In adapted animals, excessive amounts of oxalates are absorbed and not all oxalates are detoxified in the rumen. Calcium deficiency resulting in:

The primary cause of the condition is an acid-overload resulting from large intakes of American aloe, which has a relatively low pH (approximately 4,3). Affected animals suggested some resemblance to the "stiffness" syndrome seen in ruminants suffering from a grain-overload.

In acute cases can be effective