The weak, loss of condition, and death of young Angora goats.

This is not a new condition but we are now able to explain what farmers have for many years seen in their young Angora goats. Producers often encounter the common problem of young Angora goats that are ‘poor doers’, weak, fail to gain weight or lose weight, and the few that just fade away and die.

Roundworms and coccidiosis are often the primary causes and need to be ruled out as a cause of the clinical picture.

Lymphocytic-Plasmacytic Enteritis (LPE) is a form of infiltrative bowel disease caused by an abnormal immune response.

How common is this in Angora goats?

Well, we don’t know? Since we have been able to diagnose the syndrome it is clearly much more common than we think and on 6 farms suspected cases have been confirmed by histopathology.

On the farms where the condition has been diagnosed it has been the same picture of weaned to just under 2yrs old Angora kids/young goats which are:

The goats had been well fed, extensively treated for roundworms and coccidiosis (confirmed clean on faecal samples and post mortem) without there being any significant response. 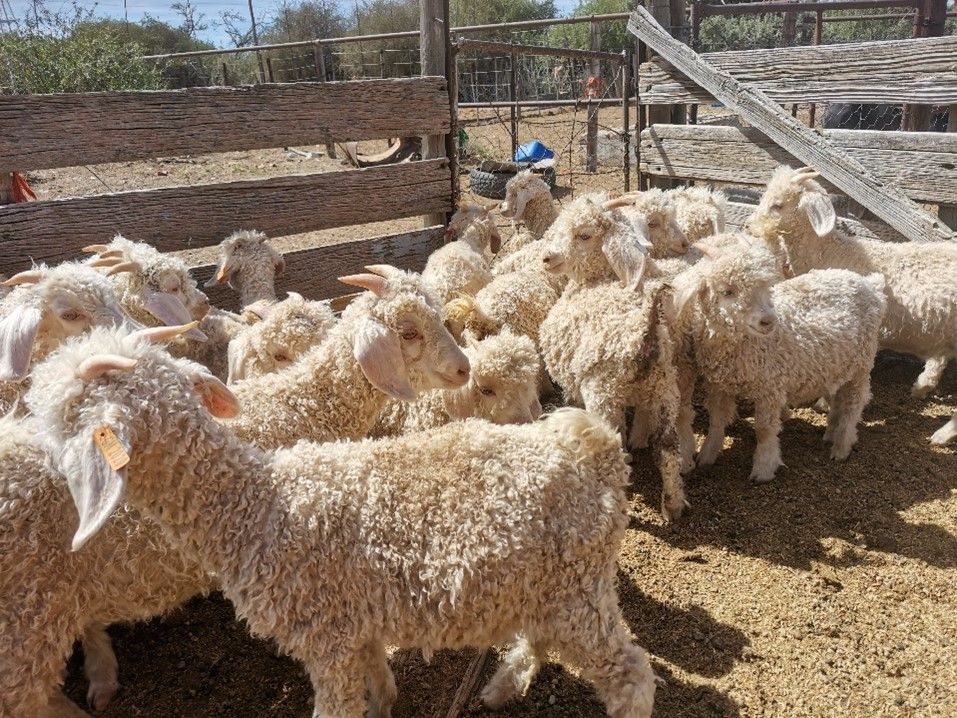 What causes the weight loss and weak condition?

The infiltration of the intestine by certain inflammatory cells (lymphocytes and plasma cells) leads to an inflammatory bowel condition and enlargement of the lymphatic tissue associated with the intestine. The infiltration can lead to various degrees of villous blunting or atrophy, mucosal and submucosal oedema, necrosis, and mucosal haemorrhages. This all leads to malabsorption of nutrients, a protein-losing enteropathy, and weight loss.

Above photo: A mesenteric lymph node (lymph node draining the intestinal tract) which through proliferation/hyperplasia is easily as thick as one’s thumb?

Compare this to a normal-sized mesenteric lymph node which is the thickness of a thin pencil - below. 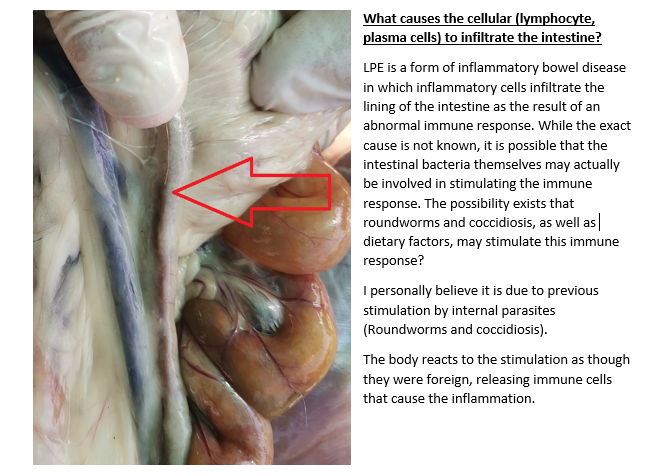 Can the condition be prevented?

Trace element deficiencies (Cu, Co, Se, Zn, I) and Vitamin A and Vitamin E deficiency have been associated with immunodeficiency states and therefore predispose to complicating infections (bacterial, viral, protozoal, fungal/yeast and parasitic) with the development of lymphoplasmacytic enteritis. (Dr Rick Last – Vetdiagnostix).

However basic mineral analysis performed by Vetdiagnostix lab on liver samples from kids with LPE indicated normal levels of Selenium, Zinc and Manganese.

There is no strong evidence of a genetic cause in other species.

At this early stage of the disease I believe that internal parasites play a major factor in this abnormal immune response and so do think that parasite management plays a major role in this condition.

Definitive diagnosis of LPE is difficult and is often based on Post Mortem histopathology results. Albumin (blood protein) levels may be an indicator in the exclusion of other differentials of protein loss (coccidiosis, roundworm as examples).

Our Albumin levels ranged from 16-24g/dl (30-37 normal) which were backed up by histopathology results of PLE.

What is seen on the Post Mortem Histopathology reports?

Large intestine: Marked proliferation of goblet cells in the surface and glandular epithelium with moderate infiltrates of lymphocytes and plasma cells (lymphoplasmacytic enteritis).

In horses: Kemper et al (2000) reported that the gross appearance of the intestine on necropsy was normal in 10 out of 13 horses in their study. Four out of 13 horses had mesenteric lymphadenopathy. Dilated lymphatics, mucosal ulceration, and muscular hypertrophy were also identified in some horses.

Other species in which LPE has been diagnosed.

LPE has been diagnosed before in horses, sheep, cows, cats, and dogs where it can result in weight loss and diarrhoea.

Can the condition be treated?

Successful treatment has not been definitively proven in horses with LPE. Corticosteroids are usually administered and may improve or resolve diarrhoea, but generally not the weight loss. There apparently have been some rare reports of resolution of LPE with corticosteroids (Schumacher, 2009) but the prognosis has been poor.

Medications used to treat human and small animal versions of LPE have been administered. To date, none of these treatment approaches have shown efficacy.

Due to the response in a small field study (n=36) we previously conducted on cases of Hypoalbinaemia secondary to brown stomach worm and coccidiosis we repeated a similar field study on one of the farms where Post Mortem confirmed PLE.

Response to treatment in Angora goats

In the field study 25 goats kids (9 months old) that showed similar clinical signs of PLE to a post mortem conducted a month previously were randomly selected and divided in 4 groups.

All groups were had been fed a lick and lucern hay. Weight aprox 10-12kg

Blue: Mineral, Vitamin supplement (in this case B Co bolic, Camino-Virbac but a number of options available) 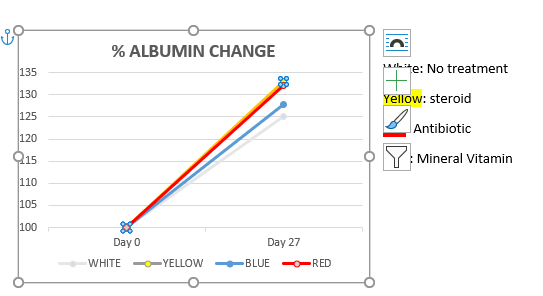 The improvement in Albumin levels were significant over the month and indicates that young Angora goats do recover naturally while well fed. It does show that treatment does have a benefit and giving all 3 may have an accumulative effect?

What is interesting is that similar treatments in another field study we conducted to determine the recovery of Albumin levels post Coccidiosis/Brown stomach worm showed very similar results. See the graph below where the treatment with Antibiotics, Mineral and Vitamins and Steroidal anti-inlammatory made a significant difference to recovery rates compared to no treatments over the first 3 weeks. Treatments were given on day 0, 3 and 7 whichwas similar to the above treatments. 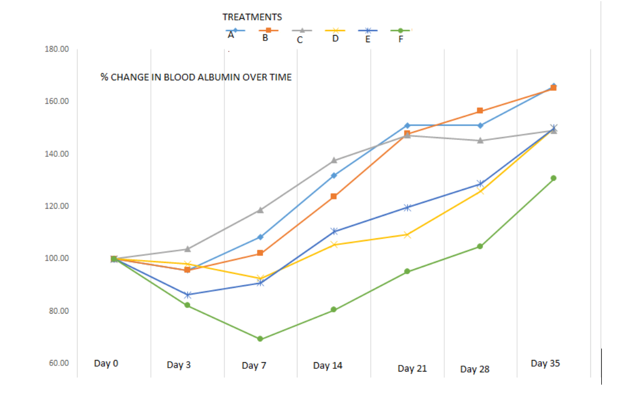 D: Add lib Pellets (feed) It appears that up until day 28 the kids with ad lib pellets did not perform much better than the equivalent kids in the veld (E). The rate of improvement increased after day 21. Possibly due to recovery of the gastr0-intestinal tract and parietal cells (acid secreting-pH)

F: No treatment We can see from the graph that the protein levels continued to drop. For welfare reasons we treated these kids for Brown Stomach Worm and Coccidiosis on day 7 after which they started to improve. It is quite obvious that the underlying problem of Brown Stomach/Coccidiosis must treated.

Detail of the Hypoalbinaemia (low blood protein) field study following coccidiosis and brown stomach worm can be found at https://www.angoras.co.za/article/treatment-of-hypoproteinemia-swelsiekte-following-brown-stomach-worm-and-cocidiosis-infection

It does appear in Angora goats diagnosed with LPE or following coccidiosis or brown stomach worm infection that there is merit in treating these goats (after parasites are clear) with:

It is important to remember that LPE is an abnormal immune response so it is vital that young kids are on a high nutritional level and do not have any trace element deficiencies (supplement mineral/vitamins) to maintain a healthy immune system as well as ensuring internal parasites(roundworms and coccidiosis) are well managed.