Coccidiosis is one of the most important diseases affecting Angora goat kids, and outbreaks can lead to severe losses. Apart from the mortality caused by coccidiosis, affected kids who do not die suffer a serious setback. The chronic form of coccidiosis usually results in stunted growth, lowered resistance to other diseases, and secondary problems such as Lymphocytic Plasmacytic Enteritis.

At what age is coccidiosis first seen?

Nursing kids appear more at risk of acute severe coccidiosis. Occasionally, kids as young as 2 weeks may be affected (usually 4weeks to 5months). Older animals can also be affected if not previously exposed as kids.

Kids post-weaning to up to a year old are commonly affected by chronic coccidiosis resulting in poor growth, lowered blood protein levels and a more deficient immune system. 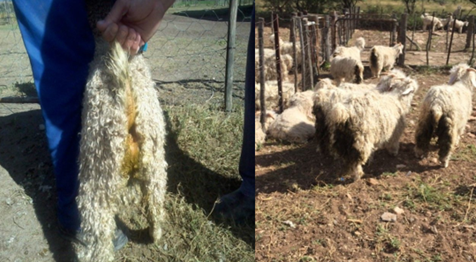 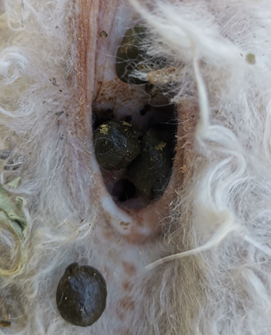 How do kids get infected?

The infection occurs by ingesting the sporulated oocyst through the pasture, water or faecal contaminated feed troughs. Oocysts can be transferred by wind and flies. Kids sucking ewes contaminated teats can potentially pick up the infection. After infection, oocysts will be passed through the faeces to the environment in about 2 to 3 weeks. However, they must undergo a period of sporulation in order to be contagious to another host. This sporulation period occurs when there is adequate moisture and warm temperatures. The incidence of the disease is significantly reduced under cold conditions, such as when frost occurs.

How is the damage done?

What makes a Coccidia species more pathogenic is if it infects both the small and large intestine. There are many stages in the development of the coccidia, and at each stage, intestinal cells are invaded and then destroyed – causing repeated damage to the intestine. The intestinal damage can release blood and cause inflammation of the gut lining. The animal loses blood, water and protein and cannot absorb nutrients as efficiently.

Kids suffering from chronic coccidiosis are often found for these reasons to have low Albumin (blood protein) levels of below 20g/dl, which would typically be in the region of 30-37g/dl. The low albumin levels often result in the ascites (fluid collection in the abdomen), as pointed out by the arrow in the photo below on the left. 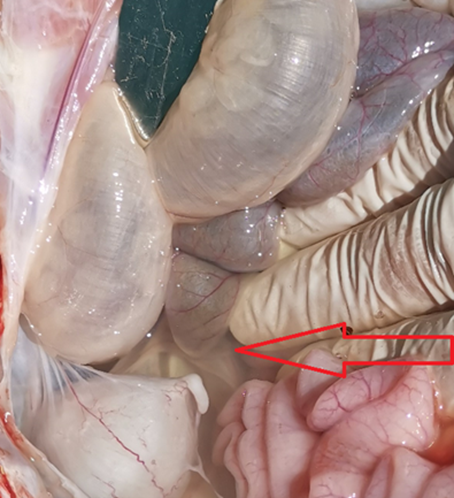 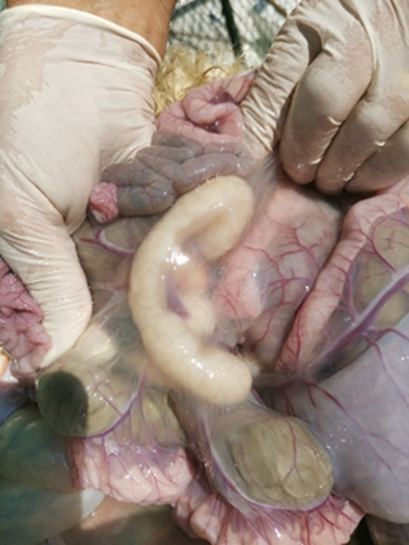 The Chronic stimulation of the coccidiosis damage and inflammation of the intestine results in the massive lymph nodes draining the intestine, as seen in the photo on the left (usually the thickness of a pencil).

For this reason, I believe chronic coccidiosis is one reason we see so many cases of LPE (Lymphocytic Plasmacytic Enteritis) and roundworm stimulation.

For more info on LPE, see our website https://www.angoras.co.za/article/lymphocytic-plasmacytic-enteritis-lpe-in-angora-goats

One of the problems of chronic coccidiosis is lowered blood protein. Immunoglobulins, also known as antibodies, are glycoprotein molecules. They act as a critical part of the immune response by specifically recognising and binding to particular antigens, such as bacteria or viruses, and aiding in their destruction.

This is why the kids may die from other conditions such as pneumonia when suffering from chronic coccidiosis.

The intensity of clinical signs of the disease depends on how many intestinal cells are damaged by invading organisms, the susceptibility of the animal, and the body condition.

Signs may appear fairly suddenly, and a kid may be only mildly ill the day before and may be very sick the next day.

Kids with chronic coccidiosis may never fully recover from the effects of the disease. Coccidiosis may lead to Lymphocytic Plasmacytic Enteritis (PLE), as discussed earlier.

The inner layer of the intestine may reveal haemorrhaging or ulcerations in the intestinal wall.

In acute cases, blood in faeces may occur.

The best way to diagnose coccidiosis is based on the clinical signs shown in the group of animals and evidence of infection based on post mortem if any animals have died. Taking a faecal sample and having a quantitative count of the number of oocysts (faecal oocyst count or FOC) in the ‘mismonster’ can also be helpful.

Remember that shedding of the coccidia eggs – oocysts – is not evidence of disease but only evidence of infection.

Why does one flock have a problem with coccidiosis and another does not?

Why are some years or times of the year worse than others?

It is important to realise that different factors all play a role.

Stress is the predisposing factor in kids during the post-weaning period. It is easier to consider the factors in three categories:

How to reduce the predisposing factors?

The goal of using medications is to control the level of infection to prevent the disease but to still allow enough infection so that the young animal develops immunity.

Drugs are an expense, and there should be a benefit higher than their cost to decide to use them.  Even the best drug cannot protect stressed goat kids or those in a heavily contaminated environment.

The therapeutic dose is 0.5 mg/kg BW daily for sheep and goats, although there is strong evidence that 1 mg/kg body weight is much more effective in goats. It is not toxic but is much more expensive than lasalocid or monensin. Decoquinate works very early in the life cycle, killing only the sporozoites as they first infect the kid or lamb, so it is ineffective in animals with a disease. Decoquinate is non-toxic. It is less dangerous to make an error on the high side to ensure they receive enough.

It kills the “free-living”(sporozoites) stages of the coccidia as they move from cell to cell in the intestine and may help control disease after the animal is infected.  To be effective, kids need to eat 1 mg lasalocid /kg body weight per day, and Tauratec dosage advice is 0.1-0.4 per animal per day. Too high of a dose may be toxic to goats, but fortunately, lasalocid is the least toxic of the ionophores.

Monensin is more toxic than lasalocid. 11-22g per ton feed. 11.9 mg/kg BW/day (only slightly more than 10 times the therapeutic dose will kill 50% of the kids). Kids must be introduced to a ration slowly over 2-3 weeks to acclimatise the rumen organisms.

Very safe and has high tissue levels for longer periods than Diclazuril (Vecoxan). Do not use in pregnant goats. However, in field studies with Angora kids, there is no additive advantage, and the duration is

Dose 0.4ml/kg. There is some evidence in the literature that goats may require a higher dose of 0.6ml/kg. Totrazuril kills coccidia in the intracellular stages. All the rest of the coccidiostat drugs only kill the “free-living” stages as they swim to the next cell to infect. This means that they effectively wipe out any infection in the animal when they are treated. It is more suited for pasture-based systems when creep feeding is not used. But several factors must be considered before deciding that this is the method to control coccidiosis.

Like toltrazuril (Baycox), diclazuril works against the intracellular forms of coccidia.  Commonly used at about 6-8 weeks of age, or two administrations beginning at 3 to 4 weeks of age and the second about 3 weeks later. Like toltrazuril, you need to give it early in the disease to prevent damage. Unlike toltrazuri (baycox), the efficacy is shorter; however, in field studies in Angora goat kids, the duration with both drugs was

See the article on field studies on the efficacy of Baycox and Vecoxan in Angora goat kids on our website. https://www.angoras.co.za/article/drugs-for-treating-coccidiosis-in-angora-kids#359

Treatment must be continued for at least 4 days to be effective.

Many producers have used products off label, such as using Deccox as a paste or liquid for treatment.

Chlorine Dioxide has also been shown in field studies to effectively treat Coccidia.

SEE THE USE OF OFF LABEL TREATMENTS