Hand rearing ‘hansies’ is unfortunately often part of Angora goat farming. Hand feeding is expensive in time and money so farmers will often first try fostering these orphaned kids with ewes that have lost their kids by various methods. 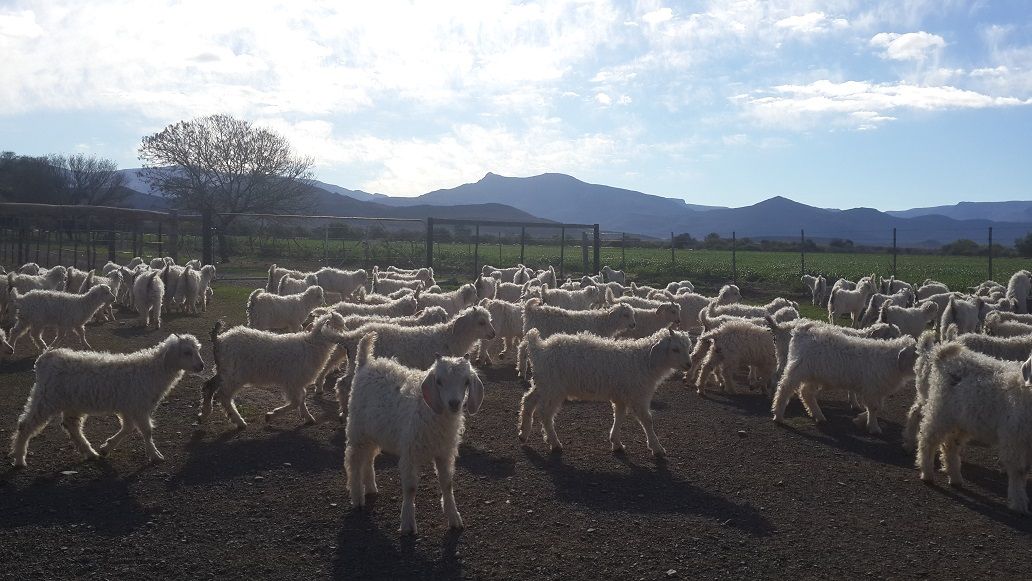 If a kid is found in the veld or lands it is usually weak and dehydrated. These kids are sometimes unable to suckle and need to be tubed. It is a good idea to first tube these kids with an oral rehydration fluid (such as Lectade or Replensol ) before  giving them milk.

Ideally, the Angora kid must have received colostrum to improve its chances of survival. If the kid does not receive this colostrum it often dies after a few days on a milk replacer and a large rubbery milk curd can be found  in its gut.

It is a good idea if possible to milk out ewes that have lost their kids in this first 48 hours. This ‘bank’ of colostrum can be kept frozen for up to 2 years. When this is frozen colostrum is thawed for use do so in lukewarm water (

A kid that has already suckled for at least a day does not need colostrum.

If colostrum is not available a mixture can be made with:

Mix well and divide the mixture into 4 equal feeds for the first day's feeding. Divide it into six equal feeds instead of four if the kid is small or weak.

If we watch a kid and ewe together we will see the ewe basically allows the kid to drink a little , then she makes the kid stop so kids nurse often, but not for an extended period of time.  Hence, when we bottle feed very large quantities of milk, we are allowing the kid to drink more than he would if he were “on” his mother.  Overfeeding is often one of the most common causes of ‘hansie’ deaths.

Angora ewes' milk is about the same strength as cows' milk, which contains about 4% fat and 8% solids-not-fat. So, if using calf milk replacer for kids, make it up at the same rate as for calves. Rather use proper milk replacer such as ‘Biolam’.

Do not water-down cows' milk.

When to feed and how much?

Remember that more kids die from overfeeding than underfeeding. Overfeeding can cause scouring. The milk should be at body temperature for the first 4 days and thereafter this is less important.

All equipment must be thoroughly cleaned each day to prevent the spread of gut infections.

Always feed a goat kid in a fashion that makes them hold their head up, similar to how they reach up to the udder when drinking from the ewe as this helps ensure milk does not enter their lungs.

Once the bottle is in the kid’s mouth, gently flick the tail.  The ewe does this to get the kid under her and then continues licking the tail, while the kid is sucking.  This encourages the kid to suck more.

What to do if kids have diarrhoea?

Scouring should be countered by reducing the amount of feed and following the following guidelines before resorting to antibiotics.

Feed 150-200 ml of the Lectade® solution twice to four times daily as required. The solution should be fed at the animal’s body temperature using a feeding bottle and teat or stomach tube.

At all times make sure that kids have access to fresh water.

When can I add a lick?

Goats learn to eat hay by example so a hansie kid will eat lucern hay better if he is near other kids/goats that eat hay.  Milk feeding should be combined ideally with access to pasture and water and even kids at a week will start nibbling at pasture.

If you wish, a small amount of concentrate feed and good hay can be provided from two weeks of age. It is not necessary to feed concentrates if adequate pasture is available.

Raising orphaned kids is expensive and time-consuming and is most successful when those involved have a passion for the job.