When should we feed Angora ewes?
By Dr Mackie Hobson

The seemingly endless drought has led farmers to review what the effect of supplementary feeding has had on their ewe and kid production.

Some farmers who intensively fed their ewes have experienced higher than normal kidding and weaning percentages. The higher number of kids is not necessarily desirable in drought conditions and it is more important to ensure that each ewe produces a viable kid at weaning.

The natural time for mating Angora goats (autumn) coincides with the time of the year when natural grazing is good and will normally satisfy the feeding needs of the non-pregnant ewe. For breeding ewes, however, there is sufficient proof that the practice of stimulatory (flush) feeding can raise conception figures and the eventual kidding percentage. The relative effect of flush feeding will increase with a decline in the state of the natural grazing. In the case of young two-tooth ewes mated for the first time, the effect of flush feeding will be most dramatic and in these animals at least, should always be applied. It is well accepted that ewes under 27-28 kg have poorer kidding percentages. 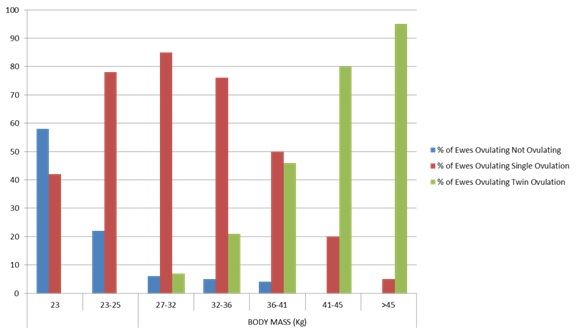 Effect of ewe weight on ovulation rates   (Shelton and Groff)

Jan Hoon (Grootfontein) determined whether the effect of supplementing Angora goat ewes before kidding and during lactation had an economic advantage for the producer. Supplementation was started a month before kidding and maintained until eight weeks after the first ewe had kidded, which means a total feeding period of 12 weeks.

Over an extended period the study indicated that there was a substantial response (ewe body weight, growth rate of kids and weaning %) during poor veld conditions. During good seasons the benefit was minimal. The availability and current price of different feeds must influence decision-making regarding whether or not to supplement, as well as the amount of supplement to be fed. The farmer can save money by matching the level and type protein fed to late pregnant and lactating ewes to the veld types and conditions.

It has always been understood that the ewe’s nutrition also has a big impact on the survival rates of the kids. A study by A. Snyman determined that the average mortality rate from birth to weaning of kids in 12 Angora goat studs over the three-year period was 10.7 % (varying from 5.7 % to 17.8 % among the different studs). Most of these losses occur in the period just before birth until seven days after birth. Nearly 80% of these mortalities are related to the nutrition of the ewe during the last weeks before kidding and the first weeks after kidding. Poor nutrition of the ewe leads to a low birth mass, decreased colostrum and maternal antibody uptake as well as poor milk intake and poor mothering. A kid’s birth weight below 2.0 kg, only had a survival rate of 50%, while more than 90% of kids with birth weights above 3.5 kg survived to weaning age.

Trials were conducted by Louw (Grootfontein) to determine the different levels of Protein and Energy combination feeds to determine the effect on milk production. The High Protein/High Energy Ration produced the most milk with the High Protein having a more significant effect than High Energy. Kids from ewes on low energy and a low protein diet are already nutritionally deficient at three weeks. Kids’ dry matter intake (veld) increases dramatically after about six weeks of age and so the kids become less dependent on the ewe.

The effect of nutrition is also seen in studies by Grobbelaar and Landman where ewe kids run under veld conditions without supplementation, weaned on average 53% kids, compared to the kids in pasture raised kids which weaned 84% kids.

The question may be asked whether mineral and vitamin should be supplemented. Trials by a mineral manufacturer were conducted to determine the effect on reproduction traits of Angora goats. These indicated weaning was increased by 4.6 % but the pregnancy rates and kidding % were not significantly improved (

Other mineral trials conducted by Hoon were done where Angora goats were supplemented  with Zn, Mn and Se in different areas in the karoo. From the results it would appear that supplementation of Zn, Mn and Se had a positive effect on the reproduction of Angora ewes, although differences were relatively small at most localities and in some cases even were in favour of the control.

The only source of Vit A and E for the kid is via the colostrum as it does not cross the placenta and hence supplementation 4-6 weeks before kidding in times of drought or dry winter should be considered. The liver reserves of Vit A in Angora goats may last up to 6 months.

There is no doubt regarding the importance of supplementary feeding during times of poor veld conditions especially over a 12 week period from about a month before kidding. However the economic advantage is lost during good seasons. The rainfall in the month before the ‘supplementation period’ will often determine whether or not supplements will be necessary as well as the type and duration of feeding. Under favourable grazing conditions, the supplementation period can be shortened.