Why do Mohair producers struggle with the control of parasites in Angora goats more so than in sheep, particularly in weaned kids?

It is well known and proved that the Angora goat has a poorer ability to resist certain internal parasites compared to sheep.

Goats historically evolved as browsers and so have been less exposed to infective larvae and oocytes which are rarely found more than 20cm above the ground.

Even when comparisons between Angora goat kids and other goats are made the acquired immunity is poorer. This can be demonstrated in the development of Antibodies against roundworms between Cashmere and Angora goats compared over 3 years of data. (Ref: Breeding Fibre Goats for Resistance to Worm Infections Gastrointestinal, nematode or helminth By S. Walkden-Brown, B. Sunduimijid, M. Olayemi, J. Van Der Werf and A. Ruvinsky)

This is one of the reasons that when treating kids for parasites (roundworms, coccidiosis) the levels of parasites appear to quickly climb to previous levels after repeated exposure. The graph is consistent with the greater ability of Cashmere goats compared to angora goats to limit infections following a challenge.

What is this immunity?

There are 2 types of immunity:

How does immunity work against intestinal parasites?

It is believed that intestinal parasites stimulate a Type 2 antibody-dependant response while with intracellular parasites a Type 1 response is stimulated. The Type 2 response involves the flooding of the local mucosa with inflammatory cells (mast cells, eosinophils) and the development of immunoglobulins (IgE). Initially cytokines including interleukins. The first line of defence is the gut-associated lymphoid tissue which responds to the antigens released by the parasite. (See the enlarged mesenteric lymph nodes of the Angora kid stimulated by a severe chronic coccidiosis infection in the photo below) 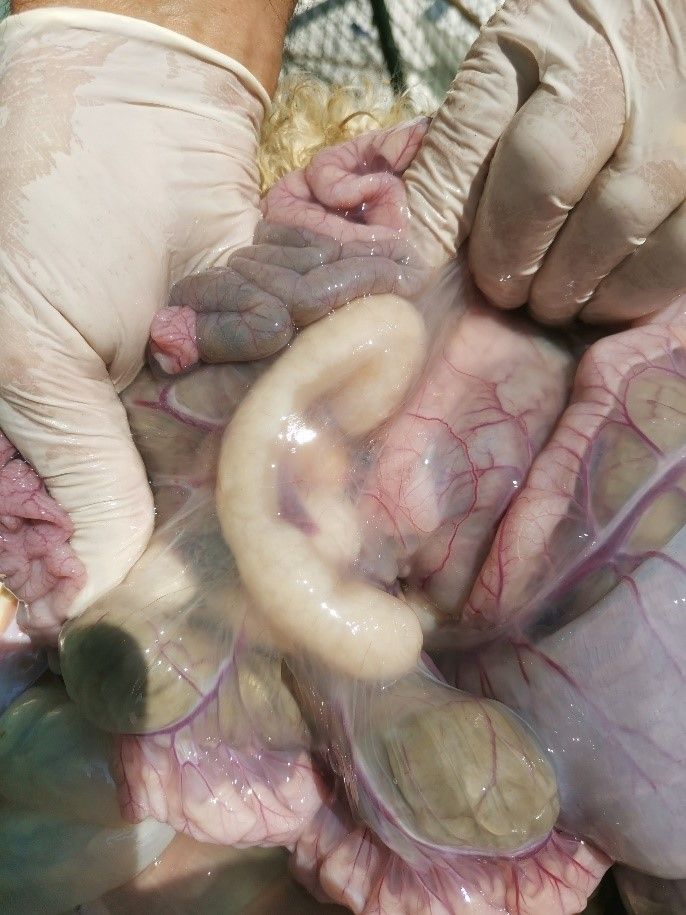 A number of factors have an impact on the immune system resulting in the poor and delayed response by Angora goat kids.

The immune response of goats against H. contortus (wireworm) has been reported to be lower and develop later in age as compared to sheep (Hoste et al. 2008).

The age of the development of acquired immunity in Angora goats may vary but studies suggest that some  resistance to roundworms is established by 12 months of age and that there is no marked increase in resistance beyond that age, although if adjusted for infecting dose size suggested an increase in acquired resistance may occur up to 18 months of age.

Goat kids can develop resistance to infection provided that they have sufficient challenge beforehand. This suggests that parasite control methods that rely on maintaining some parasite burden in the host are more likely to be successful than those that suppress worm infections totally.

Roundworm management based upon close monitoring of worm egg counts (WEC) and treatment intervention only when the WEC exceeds a given threshold based on worm species involved, animal condition, nutrition, and climatic conditions is likely to maintain immunity in the population and help regulate infections. (Kahn et al., 2006; Scrivener et al., 2006).

Pregnancy (a month before kidding) and lactation (2 months) result in a weakened immune system with the result that when usually 5% of stage L3 wireworm larvae picked up off the pasture develop into adults this can rise to 25-30%.

This is also reflected in the study where ewes that had given birth and were lactating had significantly higher FECs than 'dry' does in the flock, suggesting that like sheep, goats exhibit a post-parturient relaxation of immunity.(.A Vlassoff 1, S A Bisset, L W McMurtry)_

Adult ewes (dry) have better immunity than ‘kapaters’ and rams. The susceptibility of male animals to infections may be due to sex steroids (androgens), which modulate several aspects of host immunity (Klein 2000), and hence, these are often more susceptible to infection and carry higher parasite burdens.

Nutrition is vital to the goat’s immune response effecting both the goat’s resistance and resilience as supported by studies:

Therefore supplementary feeding, in particular provision of extra protein, can assist resilience to infection especially during times when metabolic resources are being directed to overcome the pathophysiological effects of infection (Knox et al. 2006).

Heritability to worm resistance although lower than sheep is a selection trait that can significantly impact roundworms as demonstrated in studies:

The selection for worm resistance is very achievable, see the website https://www.angoras.co.za/article/breeding-worm-resistant-angora-goats

Weaned Angora kids were monitored for antibody levels, weight gain to demonstrated the effect of weaning stress on decreasing the ability of kids to amount an effective immune response. (H. Imik M. Aytaç).

See the impact of weaning stress on Angora goat kids on the website https://www.angoras.co.za/article/weaning-shock-in-angora-goat-kids