Angora goats affected by mycotoxins are rare, but ingestion of one or more mycotoxins can cause clinical signs and death.

Goats (ruminants) are generally able to cope with higher levels of mycotoxins in feed than monogastrics (pigs).

In South Africa, Diploodiosis (Diplodia maydis) and Aflatoxicosis (Aspergillus flavus) are probably the most important. See the website for articles on these individual mycotoxins.

Mycotoxins are secondary mould metabolites produced by certain fungi. They are often found in grain, hay and silage. Fungi or their spores seen on examination of feedstuffs does not necessarily indicate that toxin production has occurred. These toxins are not consistently produced by specific moulds but are formed under conditions of stress to the fungus or its plant host.

The problem is that approximately 100 species of fungi produce secondary metabolites that are dangerous when ingested by animals. Fusarium, Aspergillus, and Penicillium are the three most common types. The most common mycotoxins of concern are aflatoxins, ochratoxin Patulin, fumonisins, zearalenone and nivalenol/deoxynivalenol.

Does pelleting or processing remove the Mycotoxins?

The absence of fungi or their spores does not exclude mycotoxicosis, and a process like pelleting can destroy fungi while the heat-tolerant mycotoxin persists.

How does the feed get the mould?

Mycotoxins occur due to fungal contamination of the feed during growth, harvest or storage.

Can goats get Mycotoxicosis from green pasture feed?

An outbreak of suspected mycotoxin toxicity was associated with the grazing of green oats (Avena sativa) in the South-Western Cape Province. It was characterized by diarrhoea, photosensitivity and death in goats. A fungus, Drechslera campanulata, was isolated from conspicuous reddish-brown leaf spots on oat plants collected.

Which goats are more susceptible?

Young, immature animals are more at risk, and Mycotoxins are not transmissible from one animal to another.

The effects of mycotoxin ingestion are mainly chronic, with reduced ingestion, productivity and fertility. These effects cause economic losses through changes in animal growth, feed intake reduction or feed refusal, and suppression of the immune system.

Multiple mycotoxins may be present in feedstuffs, and their different properties may cause varied clinical signs.

In toxic conditions symptoms may include:

Mycotoxicoses are not successfully treated.

Treatment with drugs or antimicrobials has little effect on the course of the disease.

Inactivation of the toxin in the gastrointestinal tract can be supported by using quality feed ingredients. Maintaining clean and dry storage facilities and reducing storage time can help prevent mycotoxin formation.

What are mould inhibitors?

What are mycotoxin binders?

Mycotoxin binders or adsorbents are substances that bind to mycotoxins and prevent them from being absorbed through the gut and into the blood circulation. The most commonly used are the aluminosilicates – clays and zeolites. Most of these products are efficient binders of aflatoxins. However, they have limited or no activity against other types of mycotoxins.

There are different mould inhibitors and binders on the market.

These vary due to the different mycotoxins. 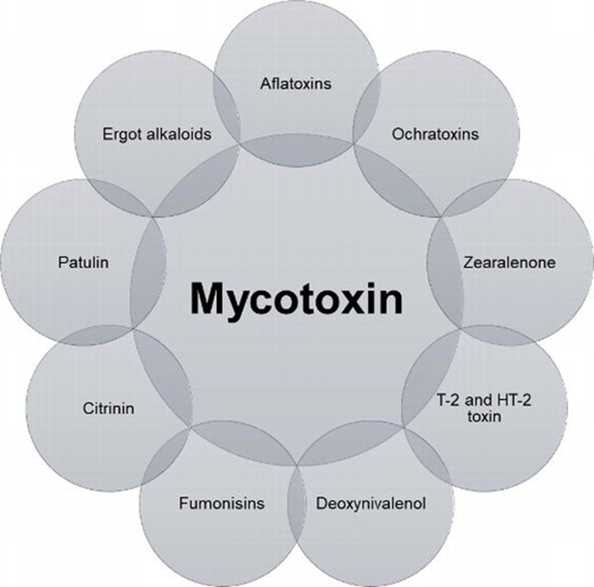 Review on Mycotoxin Issues in Ruminants: Occurrence in Forages, Effects of Mycotoxin Ingestion on Health Status and Animal Performance and Practical Strategies to Counteract Their Negative Effects

Recent Biosensors Technologies for Detection of Mycotoxin in Food Products

MYCOTOXICOSIS IN A MERINO FLOCK

An experimental mycotoxicosis in sheep and goats caused by Drechslera campanulata, a fungal pathogen of green oats