Where is all the protein going? 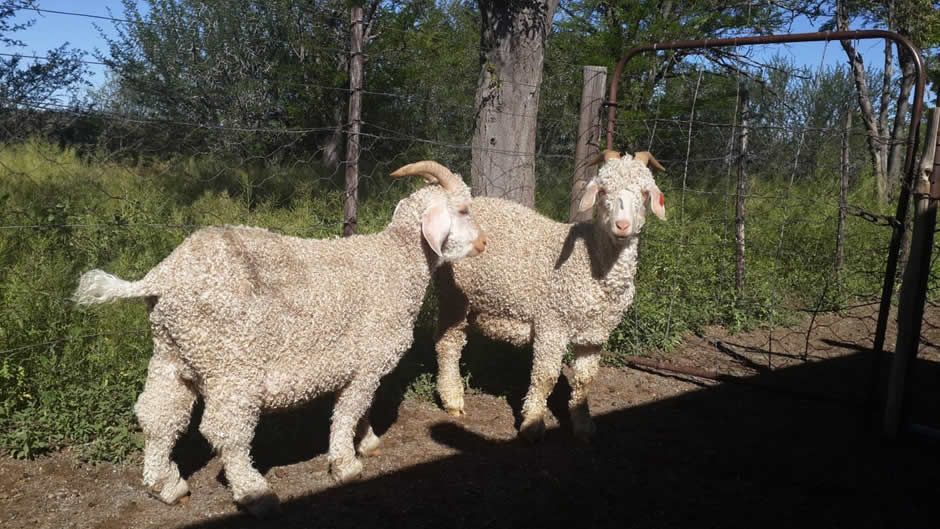 Swelling disease, ‘swelsiekte’ in Angora goats is the acute onset of severe subcutaneous oedema (fluid) of the lower body parts ventral neck, chest and abdomen, front and hind legs. The swelling is cold, pits on pressure and is painless.

The first cases of swelling disease in South African Angora goats have been reported during the early 1970’s.  However, no conclusive evidence had been found to establish the cause of the disease.

From previous research one of the common factors that can be extracted from the data is a relatively consistent finding of a reduced plasma protein level.

10 goats with ‘Swelsiekte’ and 10 without were sampled from each group (60 in total).

A battery of tests was carried out by Idexx laboratories with consistent findings in swelling goats of:

Total Serum Proteins (TSP) and Albumin findings from these outbreaks can be summarised as follows: 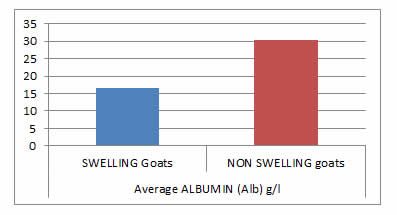 Arranging the levels of TSP - Highest to lowest value of NON SWELLING Goats (n=30) and Lowest to Highest for SWELLING goats (n=30) we can observe: 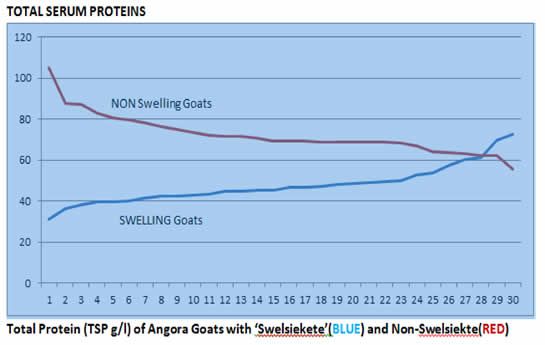 Arranging the levels of Albumin - Highest to lowest value of NON SWELLING Goats (n=30) and Lowest to Highest for SWELLING goats (n=30) we can observe: 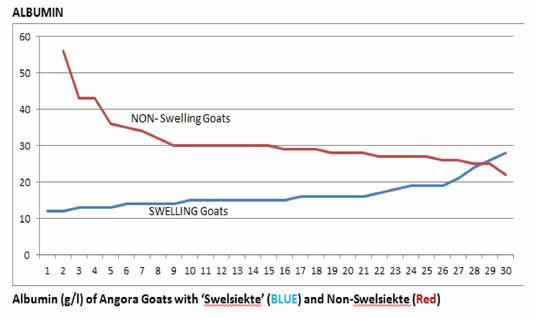 Albumin is largely responsible for maintaining intravascular oncotic (colloid osmotic) pressure, contributing up to 80%.  A reduced oncotic pressure is clearly related to the occurrence of ‘Swelsiekte’. Where is the Albumin going?

Under normal circumstances in various species documented the a:g ratio of interstitial fluid is not largely different from that of plasma. (Y.Zurovsky, G.Mitchell and J.Hatting 1994).

The plasma and Interstitial a:g ratio should generally be relatively similar, but this is not the case in swelling Angora goats.

What causes the Albumin:Globulin ratio to be so different in SWELLING disease?

From the results in Table 1 (above), it can be seen that in swelling disease:

This is due to albumin concentration reducing to a greater extent than globulin in the plasma compartment so the a:g ratio decreases

This is due to the albumin concentration reducing to a lesser extent than globulin after dilution so the a:g ratio increases.

A low oncotic pressure (reduced albumin) in the plasma of ‘swelsiekte ‘ goats would cause fluid to filter into the interstitial space through the capillary walls and lower the concentration of interstitial proteins (albumin and globulin) to a similar extent.

If there had been no leakage of albumin through the capillary wall then the a:g ratio in interstitial fluid of swelling  goats (1.2)  would have similar (diluted ) or lower than that of interstitial fluid of normal goats (0.69). It is in fact (1.2) which is 74% higher than a normal goat. Therefore there is clearly leakage of albumin as well as fluid through the capillary wall in swelling disease. 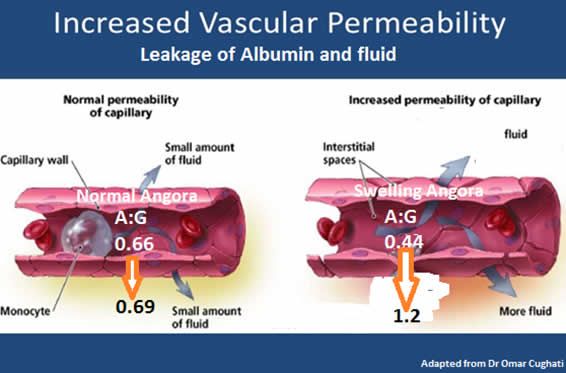 The primary cause of ‘Swelsiekte’/Swelling disease is a CAPPILARY LEAK SYNDOME.

Although some of the predisposing factors reported may contribute to a lower oncotic pressure; it is the increased capillary permeability that is the primary disease mechanism causing the hypoproteinaemia and significant reduction in plasma oncotic pressure.

This finding can direct further investigations into the important questions posed, namely:

What causes this ‘capillary leak’ and what can be done to prevent and treat the disease condition?


COMPOSITION AND VISCOSITY OF INTERSTITIALFLUID OF RABBITS

GUYTON, A. C. (1963). A concept of negative interstitial fluid pressure based on pressures in implanted perforated capsules. Circulation Research 12, 399-414.

Snyman MA, Herselman MJ   2004       Investigation into the probable cause, predisposing factors and effective treatment of swelling disease in Angora goats      The Angora Goat an Mohair Journal, 46(1) :