Text extracted from:  A REVIEW OF THE ROLE OF CYTOCHROME P450 17-HYDROXYLASE/17,20 LYASE (CYP17) IN HYPOCORTISOLISM IN SOUTH AFRICAN ANGORA GOATS

Early investigations into cold stress related deaths in Angora goats implicated a dysfunction in the adrenal cortex as the probable cause.

Preliminary studies found that the primary cause of stock losses during cold spells was due to an energy deficiency resulting from a decrease in blood glucose levels, which causes a drop in body temperature and subnormal heart function (Wentzel et al., 1979).

Fourie (1984) subsequently demonstrated that Angora goats could not cope with cold, wet and windy conditions as well as the more hardy Boer goats, even when supplementary feeding practices were employed. Fourie (1984) concluded that the Angora goat does not have the metabolic capacity to produce sufficient heat. Cronje (1992) later demonstrated that Angora does have a lower blood glucose concentration and a slower response of glucose synthesis rate to dietary energy increments than Boer goat does, providing further evidence of the inability of the Angora goat to mobilise glucose precursors.

IS THE ADRENAL CORTEX TO BLAME?

Following the study of Herselman & Van Loggerenberg (1995), which indicated that the South African Angora goat may suffer from a condition of hypocortisolism, the biochemistry laboratory at Stellenbosch University started investigating the Angora's adrenal steroidogenic pathway.

THE ROLE OF CYP17

While pursuing CYP17 as the possible cause of hypocortisolism in the South African Angora goat, Slabbert (2003) identified two CYP17 isoforms in this species.

Table: CYP17 genotyping. Goats were divided into three genotypes (Ho, Hu and He)

Subsequent to the identification of the three genotypes in the South African Angora goat population, the question arose whether the genotypes differed in their ability to cope with cold stress 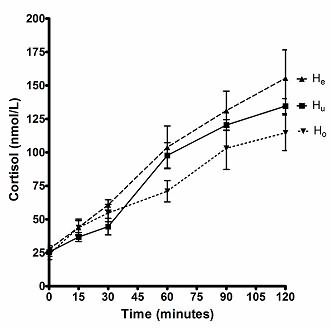 This provides strong evidence that the CYP17 ACS- gene is responsible for the observed hypocortisolism in the South African Angora goat.

The results presented in this review have:

A REVIEW OF THE ROLE OF CYTOCHROME P450 17-HYDROXYLASE/17,20 LYASE (CYP17) IN HYPOCORTISOLISM IN SOUTH AFRICAN ANGORA GOATS