The purpose of the study was to determine the effect of the oral treatment of Aloe Ferox (Cape aloe, bitter aloe, red aloe) extract on the gastro-intestinal parasites and ticks of weaned Angora goat kids.

The Angora kids had not been treated with any anthelmintic, natural or synthetic, for a month prior to the onset of the trial. Two different treatments of Aloe ferox were used in the trial:

The two treatments were compared to an untreated control group.

Gastrointestinal parasites are one of the major causes of deaths and production losses in Angora goat kids. The development of anthelmintic resistance to chemical doses and a trend in farming to use natural products has led to a number of farmers using either a commercial Aloe ferox  or  ‘home made’ oral doses to treat their small stock for parasites.

A limited In vivo validation of Aloe ferox in goats had been carried out (Maphosa and Masika) at Fort Hare University on a very small sample number (n=6). On total mixed infections Faecal Egg Count Reduction percentages (FECR%) were observed with the extract of A. ferox on days 3 (53%), 6 (54%) and 9 (58%) at 500 mg/kg.

Date and site of study:  The trial was conducted over the period January to March 2014 on the farm ‘Longacres’ in the Graaff-Reinet district belonging to Brett Walker.

These were obtained from Angora goat kids not previously dosed or treated for a month prior to the start of the trial.

Protocol:  The kids were randomly divided into 3 groups of 50. Each group was clearly identified with an ear tag.

Dosed as per manufacturer’s instructions: 60-80g of Aloe Ferox Bitter Powder (which is a   spray dried sap) which is diluted in 5 litres of luke warm water.

10ml of this is dosed every 4-6 weeks as per manufacturer’s recommendations.

The kids in this trial were dosed with 8ml of product.

The faecal samples were analysed at Grootfontein Agricultural College laboratory with thanks to Ilze Venter and Gretha Snyman. 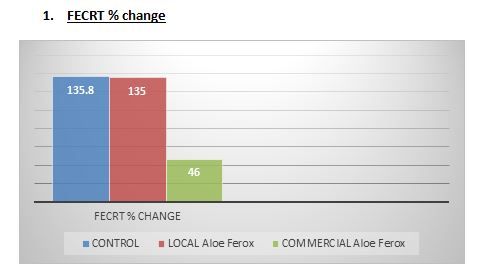 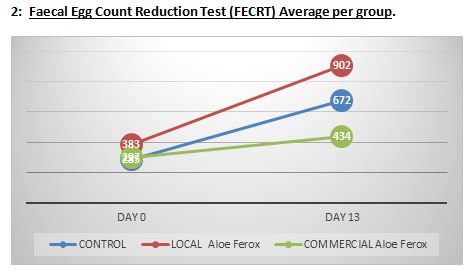 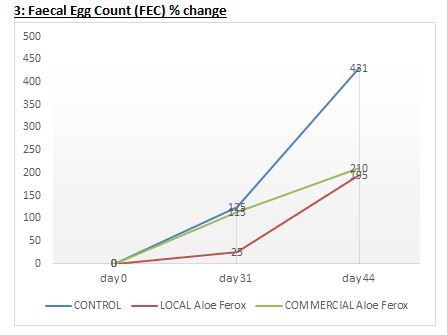 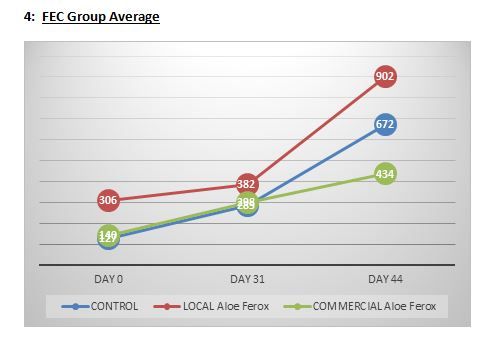 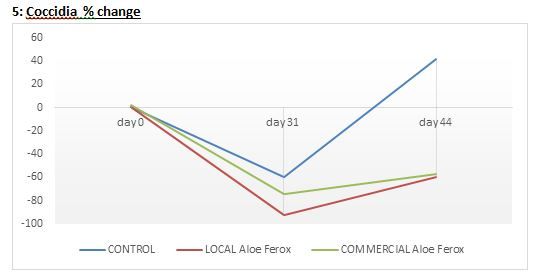 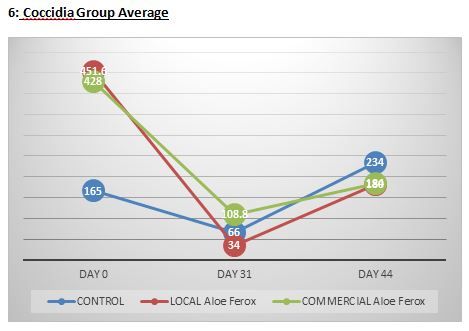 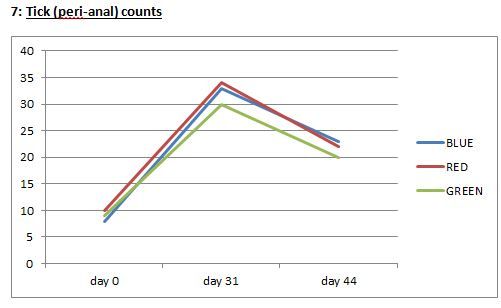 The control group (Blue line on graphs) demonstrates the seasonal fluctuation of the parasite burden at the time of year in which the trial was conducted (January to March 2014).

The Aloe Ferox extracts did not reduce egg counts in the FECRT burdens (table 1). However the commercial Aloe Ferox Bitter Powder (Green line on graphs) did retard the rate of increase to 46% against the control’s 135.8%. The locally produced extract (Red line on graphs) did not retard the rate of increase significantly and the group’s FEC was almost the same as the control (138%) when the FECRT was carried out.

With repeated treatments the extracts again failed to reduce the FEC but significantly retarded  the rate of increase (195% and 210%) against the control of 431% by day 44 (table 3).

The Aloe ferox bitter powder extract had a significant effect in inhibiting the rate of FEC increase (table 4).

However the counts increased after the second treatment which again suggests an inhibitory effect on oocyte numbers. The overall reduction was largely due to the environmental decline as seen in the control group of -60% by day 31.

A further reduction in coccidia counts was not achieved by the Aloe ferox extracts when evaluating a FECRT (FECRT 0%) 13 days after treatment.

The tick counts (table 7) follow the environmental conditions (control group) closely and no statistically significant effect of the treatments on tick numbers can be attributed to the Aloe ferox although percentage changes do favour the Aloe ferox treatments marginally. Neither of the Aloe ferox extracts would be considered to be an effective tick treatment from the results in this trial.

The recommended dose of the Aloe ferox bitter powder extract by the manufacturers (60-80g diluted in 5 litres of which 10ml is dosed) equates to 16mg per ml and so in effect each kid on average (15kg) receives 10.6mg/kg.

This is a very small dose when compared to the small Fort Hare trial  where dose levels of 500 mg/kg were used and a roundworm FECRT of 58% was achieved with reductions in coccidia oocysts also observed.

If significant increases in dose levels are to be made the side effects of Aloe ferox must also be considered. The exudate of Aloe ferox contains 15–40% anthrone (aloin) the compound responsible for the laxative properties. Possible side effects of aloin include congestion and irritation of the pelvic organs. Anthraquinone containing laxatives such as aloe may play a role in colorectal cancer as they have shown genotoxic potential and tumorigenic potential in rodents.

Aloe ferox extracts do inhibit the rate of development of both roundworm and coccidian to a limited extent and in so doing may allow the goat to develop its own immune response through exposure to intestinal parasites.  The inhibitory effect will also be likely to reduce the contamination of the environment with viable roundworm eggs and coccidian oocytes. As a treatment for ticks it is ineffective.

Aloe ferox has the potential to play a role in retarding the development of excessively high gastro-intestinal parasitic burdens and reduce the frequency of synthetic anthelminthic use. However as a treatment measured against accepted pharmaceutical standards it is not effective.

in vitro anthelmintic assay report by University of Pretoria