Angora goat farmers wean the kids at slightly different times depending on the environmental conditions and time of kidding/mating. A balance needs to be made by the farmer between the impact on the kids and the ewes being in a good enough condition to conceive at the following mating.

The effect of weaning stress is well known but what is surprising from studies is how little effect the time of weaning has on the ewe.

The impact of weaning stress on Angora kids.

Studies by King et al. (1991) reported no significant differences in the average daily gain (ADG) of weaned and un-weaned kids from 4-7 months of age when kids were fed under intensive feeding conditions.

These findings by King differed from studies by Gretha Snyman where kids were supplemented between 4-7 months. Gretha found that the impact of weaning stress on growth rates was still marked even when the kids were fed.

The findings by Gretha Snyman demonstrates the importance of the nutrition (supplementary feeding) of the kids to reduce the impact of weaning shock on the kids.

Supplementary feeding should be started at least 2 weeks before weaning. It is also better to move the ewes initially as the kids will be familiar with finding the source of feed and water and so reduce the stress.

What impact does weaning have on the ewe?

Studies by Hoon, Olivier and Griesesel evaluated the body weight change of ewes from weaning (4months) until mating/scanning, the milk production of the ewes and the conception rate of ewes in the next breeding season. These studies were of ewes on veld conditions (above average) in Middleburg district from about 2003-2006.

Scanning % - number of kids scanned per number of ewes mated

What is surprising from these studies was the fact that weaning/not weaning, under good veld conditions, did not have a big impact on ewe production figures.

What does the milk production of the ewe tell us about weaning?

If we look at studies by Hoon, Olivier and Griesesel on milk production by ewes on the veld (2003-2006, Middleburg district) we see the natural production of milk by these ewes. 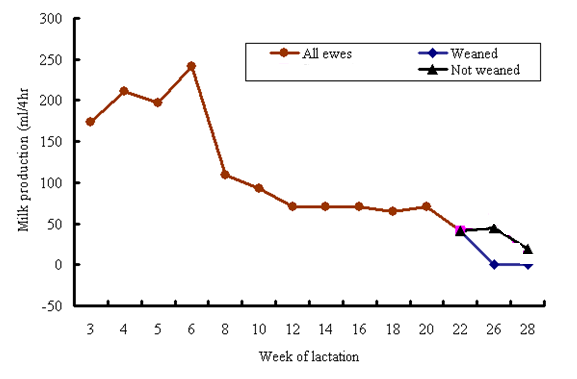 If we look at the graph in relation to some of the facts we know these may then make sense.

For more information on milk production by the Angora ewe see the SAMGA website https://www.angoras.co.za/article/milk-production-by-the-angora-ewe#303

What is surprising from these studies, under good conditions, how little impact weaning has on the ewe production while having a major impact on kid production?