A swollen head or ‘dikkop’ may be caused by different factors and appear similar so it can be confused.

The traditional ‘Dikkop’ Swelled head caused by Clostridiun novyi infection in Angora goats is very rare and usually seen in sheep and cattle. ONLY Type A (Swelled Head) has been diagnosed in South Africa. It can affect young rams and causes a swelling of the head and neck. The infection usually occurs through wounds occurring during fighting and usually in the summer months. It is also possible to get the infection through dipping after shearing.

The infection usually starts around the face and then extends to the whole head and down the neck.

The head of the Angora may swell along with other signs of photosensitivity, may occur  when poisoned by Tribulus terrestris  (‘duwweltjie’ ) under certain conditions. 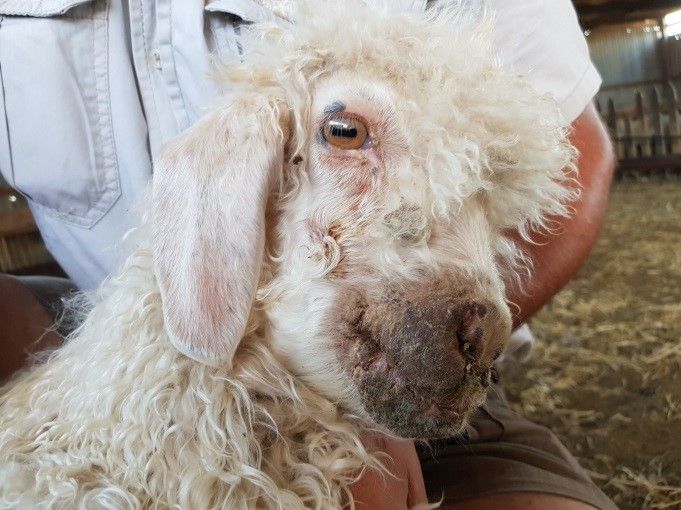 Early signs of photosensitivity, discharge and inflammation of eyes and nasal septum

The head, especially the skin under the jaw (‘bottle jaw’) area, may become swollen when the oncotic (blood protein) levels drop to below a critical level.

This may occur due to heavy roundworm infestation (especially ‘wireworm’ and brown stomach worm). The condition can also be seen in cases of chronic coccidiosis and swelling disease ‘swelsiekte’

Goats are naturally inquisitive, and so a bite from a Puff-Adder may occur. These bites usually occur to the head/muzzle area and result in severe swelling of the head.

Localised swelling (abscess) of the lymph nodes usually occurs below the ears to the side of the head or beneath the mandible. Corynebacterium - thick semi-fluid yellow-white to green-white pus is formed. Chronic abscesses are surrounded by a well-developed capsule which can lead to an onion ring appearance. C.pseudotuberculosis usually occurs in lymph nodes which drain the area of penetration.

Abscess formation may also develop at the back of the mouth, causing a swelling and abnormal protrusion of the tongue or difficulty swallowing as a result of a dosing injury.

'Lumpy Jaw', is caused by the bacteria Actinomyces bovis, which is a normal inhabitant of the bovine mouth. Actinomycosis is a chronic bacterial disease and is more common in cattle than in goats.

Cancer of the jaw bone

Cancer of the jaw bone has been known to occur in angora goats and can cause a localised swelling. The most common cancer being a Fibrosarcoma 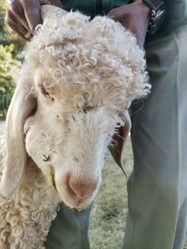 Midges and mosquito bites can cause swelling of the head/face but more the ears in severe cases.

Insect stings such as bees and wasps can also lead to a hypersensitivity swelling of the head.

Although Blue tongue may be a common cause of a swollen head in sheep, goats are resistant.