Angora goat kids growth rate of kids to weaning is good, however after weaning the kids struggle.

Below is a typical growth curve of kids on many Angora goat farms. 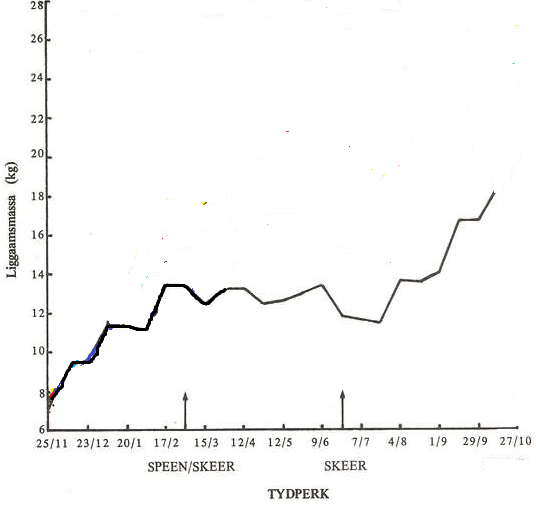 Kids that are weaned lose weight or do not progress due to “weaning shock” and under normal Karoo conditions are not able to recover sufficiently. From weaning until first mating the mortality rate is on average 12, 5 % which is appreciably higher than in other types of small stock. The acquired immunity of the kid until 9 months is poor so parasites also have a major impact during this time of stress.

The effect of weaning shock can be demonstrated in extracts from studies by Gretha Snyman (Grootfontein) on 4 to 7 month old kids.

Even where kids are supplemented the impact of weaning stress on growth rates is marked.

The experiment was repeated under veld conditions. As a result of good rains before the commencement of the experiment, the veld was in above-average condition during the period of the experiment. The ADI was calculated from weaning (4 months) to 7 months old.

The practice of swopping ewes or running with older goats in order to decrease stress during weaning, is of very limited value as these kids had ADI of 12,4 g compared 10,2 g where no adults were present.

Supplementary nutrition to reduce this set back of weaning stress is therefore important. This should ideally be started before the kids (creep feed) are removed from the ewes so that they have already adapted to the diet. This should be for a minimum of 2 weeks before weaning.

It is also a good idea to move the ewes and leave the kids so that there is less stress on the kids and they are familiar with their surroundings and where to find the water and feed.

Looking at Gretha Snyman’s data for the longevity project 2000 to 2015 the impact of nutrition can be seen when comparing ewe kids raised on the veld compared to lands.

We all know that the target is to get the maiden ewes to an ideal weight of 27kg +. However not many of us know what their weights should be and certain points in their development to reach this. By checking the average weight of the kids at strategic times we can determine ‘where they are’ and where we need to look at reviewing their management and what impact weaning stress and nutrition had on these kids.

Growth curves of kids raised under different management systems in the graph below. 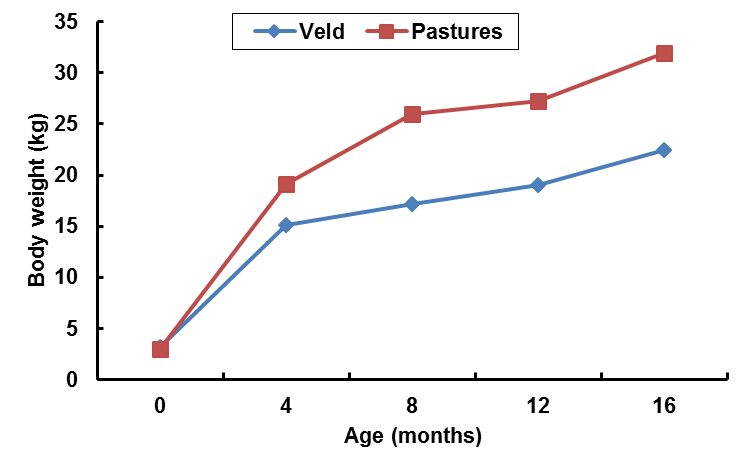 Grootfontein demonstrates the importance of feed on the weaned kids and follows a similar pattern.

Where ewe kids were run on pastures, they maintained a steady growth rate of ± 32 g/day from 8 to 12 months. In comparison, the ewe kids run under veld conditions without any supplementation, lost on average 2 g/day between 8 and 12 months of age. 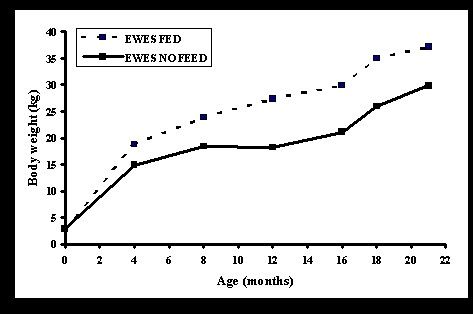 If we look at data collected by Gretha Snyman (Longevity project 2000 to 2015) we can determine the EWE kids weights at strategic times.

To achieve a weight of 27kg at first mating the the average daily gains (ADG/Day) are on average.

With these references obtained by many years of work by Grootfontein we are able to benchmark the growth rate of our Angora kids.