PROTEIN what do the terms mean?
By Malcolm Hobson

As producers we often read articles or attend talks on nutrition. These can be very confusing especially when nutritionists start talking about protein.

For those producers that do try and read the odd article on Protein nutrition I’ll will try simplify things as much as possible to try make sense of some of this confusion. Maybe next time someone starts talking about protein or you read an article in the Farmers weekly or Lanbouweekblad it might mean a bit more to you.

Firstly what is protein?

Proteins are an essential part of all living organisms, especially as structural components of body tissues such as muscle, hair, blood, enzymes and antibodies.

How is Protein expressed as part of a feed?

The protein content in a feed is often expressed as a % or as g/Kg. 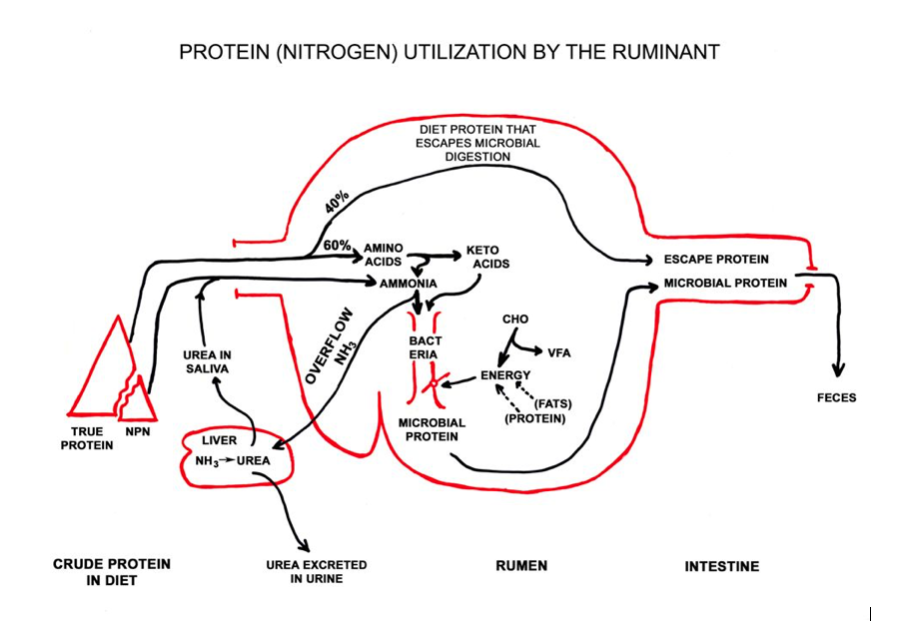 What is the Total Protein/Crude Protein (CP)?

The Total Protein is also referred to as Crude Protein (CP),

Because N is an integral part of any amino acid, non-protein nitrogen (NPN) has the potential to be utilized for protein synthesis by rumen microorganisms that is why it is included.

What is True Protein?

What is Rumen Degradable Protein (RDP)?

RDP is also known as Degradable Intake Protein (DIP). The DIP or (RDP) represents the portion of crude protein (CP) that can be digested or degraded to ammonia and amino acids in the rumen by microbes.

This fraction of CP consists of non-protein nitrogen (e.g., urea and ammonia in treated silage) plus the true proteins that are soluble and those having intermediate ruminal degradability. They are used to synthesize microbial protein in the rumen. The RDP or DIP is expressed as a percentage of CP

By-Pass protein refers to material that is not degraded in the rumen but is degraded in the abomasum and thus is not truly “undegradable.” By-pass Protein is the portion of intake protein that has a slow rate of degradability in the rumen. It is fed so that it may escape digestion in the rumen, reach the lower gastrointestinal (GI) tract essentially intact and be digested directly in the small intestine as it would be in non-ruminants. This can provide a balance of amino acids unaltered by microbial digestion and synthesis. By-pass proteins contain amino acids (a.a) that by-pass the rumen and are absorbed further down the intestinal tract. If microbes break down the a.a in the rumen then body has to rebuild them which is a waste of energy.

What is Non-protein Nitrogen (NPN)?

Non-Protein-Nitrogen (NPN) is included as NPN sources can be used for protein synthesis. All proteins contain on average 16% Nitrogen (N) whereas urea contains 45% N. Urea is an example of a NPN.

In order for urea to be utilized by the rumen microbes it must first be chemically combined with water to form CO2 and ammonia. This reaction is accomplished by action of the enzyme urease derived from certain rumen microbes. Urea is 100% rumen degradable therefore feed with caution and is highly water soluble so protect from rain.

What is microbial or bacterial protein?

Rumen microbial protein also called bacterial represents a major source of amino acids to the ruminant animal. Microbes living on the feed material and involved in its digestion is continually 'flushed' from the rumen, through the omasum to the abomasum, where they are killed and digested by the cow. The amino acids produced from the digested microbial protein are absorbed through the small intestine. The dried cells of microorganisms (algae, bacteria, actinomycetes and fungi) used as food and feed are collectively known as 'microbial protein'.

What are the PROTEIN requirements of an ANGORA GOAT?

The protein requirements of the Angora goat vary according to its weight and reproductive status.

For autumn-mated ewes, late pregnancy and lactation normally coincides with a period when the quality of the natural grazing is very low (late winter and early spring in the summer rainfall areas. Protein is the first limiting nutrient for ruminants during winter season (Allen et al.) and therefore attention needs to be given to supplementing sufficient protein to uphold the functions of the late pregnancy and lactation phases.

For more information also see articles on the SAMGA website : What is in a bag of feed? https://www.angoras.co.za/page/whats-in-a-bag-of-feed#124