It is no longer acceptable for farmers to view parasite control in terms of a “deworming program” and roundworm management strategies need to be implemented to reduce roundworm resistance to anthelmintics (doses).

Anthelmintic resistance is likely to develop much faster in Angora goats than sheep as goats metabolise anthelmintics (dose) at a faster rate than sheep and hence the reason why vets will often advise using 1.5-2x the dose rate advised for sheep.

The question we as Angora goat farmers should be asking: Can we afford not to select roundworm resistant Angora goats?

What is Anthelmintic resistance?

In Australia studies indicate that on 98% of farms there is resistance to drug groups  Benzamidazoles (‘witmiddles’) and Levamizoles (‘Koeldrankmiddles’) with 87% of farms having resistance to Macrolytic lactones (Ivermectin family) and 28% to triple combinations.  Resistance appears to be following a similar trend in South Africa.

There may be the occasional development of new worm remedies but these will unlikely be registered for use in goats..

Improving the  immunity of the Angora Goat

Immunity to roundworms varies between individuals so only a small part of the flock is often infested with most of the worms.

There are two different forms of immunity:

The immunity of individual goats can be influenced by multiple factors such nutrition, stress, stage of life and reproductive cycle. For example normally about 5% of infective Haemonchus L3 stage larvae(wireworm) establish as adult worms in adult goat ewes  but this increases to 30-40% during late pregnancy and lactation when ewes are under stress and their natural immunity declines.

There are  many success stories around the world regarding breeding sheep for nematode resistance, notably the NEMESIS PROGRAM  in Australia, that have proved that breeding worm resistant sheep is an effective and sustainable means to control internal parasites. In South Africa Dr Alan Fisher and farmer Robbie Blaine have had major success breeding resistant Dohne Merino sheep in the Stutterheim district.

The general consensus of opinion is that, if one started from scratch, with totally unselected goats, there should be a significant improvement in resistance after 8 years.

For this reason the South African Mohair Growers Association (SAMGA) vet assisted by Gretha Snyman (Grootfontein) conducted a field study with the SAMGA Angora Ram Breeders’ veld rams to try show the ram breeders that it was possible and practical to implement a system to select for improved roundworm resistance.

A selection index made up from a combination of FEC and FAMACHA data was produced by Gretha Snyman at Grootfontein(GADI).

Below table are examples from the Index and Ranking figures produced for the veld rams.

This information(Ranking and Indexx) could easily be used by Angora farmers at the rams sales to purchase Angora rams with a higher worm resistance.

It was also interesting to note that when the FEC of the rams from the different studs were compared as groups that there were significant differences. This was likely due to farmers inadvertantly selecting for resitance under higher selection pressure on certain farms (intensive pasture systems for example).

See Graph Below (Identification of the studs for confidential reasons removed) 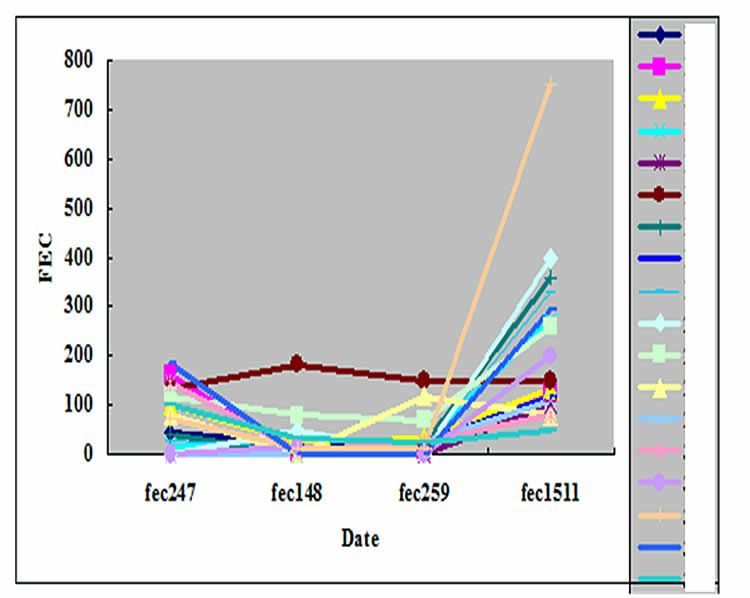 The study found that there were significant differences in the faecal egg counts ( worm resistance) between the different Angora studs. The selection pressure increased dramatically after September due to the rains and more favourable roundworm conditions.

As Angora farmers we can also learn from the successful selection policy by Dr Alan Fisher and Robbie Blaine on Dohne Merino sheep in the Stutterheim district.

The conclusion by the ram breeders from this study was not to introduce a selection index for the ram sales and it would be up to individual stud breeders to select for resistance if they so wished.

The 2 main reasons were: