Vaginal prolapse is rare in Angora goats compared to sheep but may be seen in the last month before kidding and usually associated with twins. 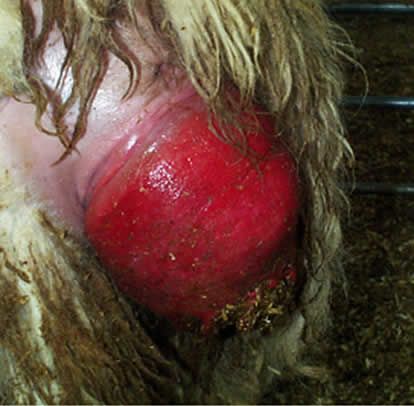 After exposure the prolapse becomes rough, cracks and is usually covered in soil and faecal debris.

What to do when a prolapsed vagina is seen?

The debris should be washed off (with a disinfectant if available) and covered in a damp towel to prevent drying out and further damage.

Often the ewe has been unable to urinate as a result of the prolapse. To relieve the urine build up the ewe is held in a standing position- raise the prolapse above the level of the vulva which reduces the fold in the neck of the bladder which allows urine outflow.

Complications as a consequence of vaginal prolapse: