Botulism in Angora goats is seldom diagnosed but has been seen in the Karoo where goats have been fed chicken litter. It is intoxication and not an infection and follows ingestion of decomposed organic matter mostly of animal origin. There are 7 types of Clostridium botulinum toxin.

Outbreaks of botulism can be divided into

Costridium botulinum  forms spores which survive in the soil and are highly resistant. The bacteria has no effect on living matter but if the animal dies then the carcase is a rich feed source for the bacteria in which the spores develop. The bacteria form a toxin which is taken in by the goat when feeding or drinking water which causes the ‘lamsiekte’.

Under what situations does poisoning occur in Angora goats?

The bacteria replicates in rotting protein rich animal and plant material such as the carcases of rotting mice and rats, tortoises, birds or hares accidently ending up in the feed or water source. Rotting Lucerne may also be a source.

The bacteria Clostridium botulinum C is a normal inhabitant of sheep, cattle and chickens. The bacteria are excreted in the faeces and contaminate the environment. The poisoning can potentially also occur where pastures have been fertilized by chicken litter.

The carcases may remain toxic for nearly a year but usually loses the toxic effect after 4-6 weeks.

The replicating bacteria produce the toxins which are taken in by the goat and absorbed through the intestinal wall. The clinical signs are then seen after 2-6 days but may occur for up to 17 days. The intoxication has most commonly been diagnosed in Angora goats where milled chicken litter has been used as part of their diet.In cattle the condition is often due to lick contaminated bones as may occur when having a phosphorous deficiency.

The clinical signs depend on the quantity of toxin taken in. The incubation period may be as short as 24 hours but up to 7 days in more chronic cases. Fatality rate is high and per- acute cases may not show clinical signs.

The clinical signs can be confused with ‘Krimpsiekte and Polioencephalomalacia (thiamine Vit B1 deficiency).

There are no diagnostic macroscopic signs. Occasionally haemorrhage on heart wall or small intestine.

It can be difficult to diagnose. A presumptive diagnosis is made from the history and clinical signs and negative PM signs.

Serum and faeces (live animals) can be collected to try find the presence of the toxin. (samples of the rumen, large and small Intestine of dead animals)

There is no treatment however Onderstepoort has an antiserum which if used in early stages may be effective. 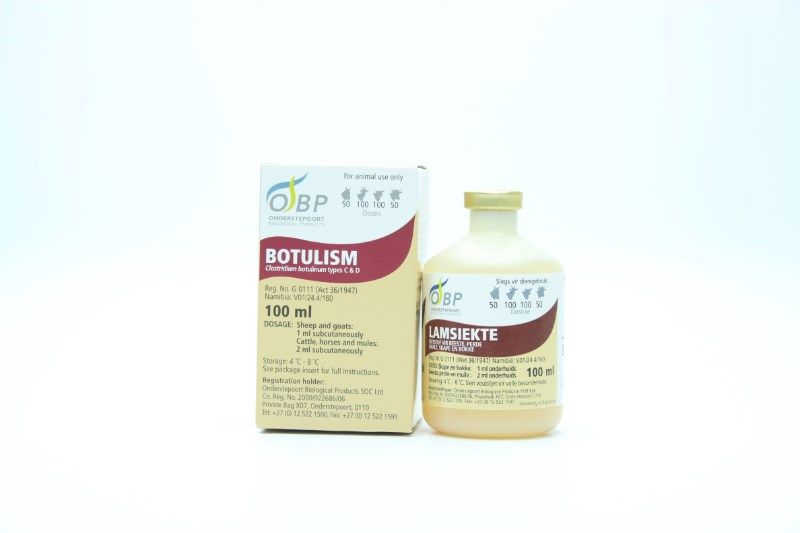