A number of factors can cause hair loss in Angora goats apart from external parasites. Other causes include Nutrition, Hypersensitivity, Dematophilus as well as bacteria and ringworm. More detail on the other causes can be found on the website.

Parasites are an important factor that can be easily eliminated when investigating the potential causes of hair loss. Most external parasites will cause the goat to itch and often the farmer may notice bits of hair stuck to the tips of the horns as a result of the goat trying to scratch itself.

In trial by Brown, van der Linde, Fourie and Horak lice adversely affected both the quantity and quality of mohair produced. During the 6 months after treatment the goats in the treated group produced an average of 271 g more mohair per animal than those in the untreated group.

When the mohair clips of the 2 groups were classed it was found that the treated goats produced better quality cuts with less damage to the hair than the untreated animals It is suggested that changes quality are indirect and result from the irritation caused by lice, which elicit host responses such as rubbing, scratching and biting. However, lice also cause the skin to thicken, and a decrease in production due to alterations in the skin structure. 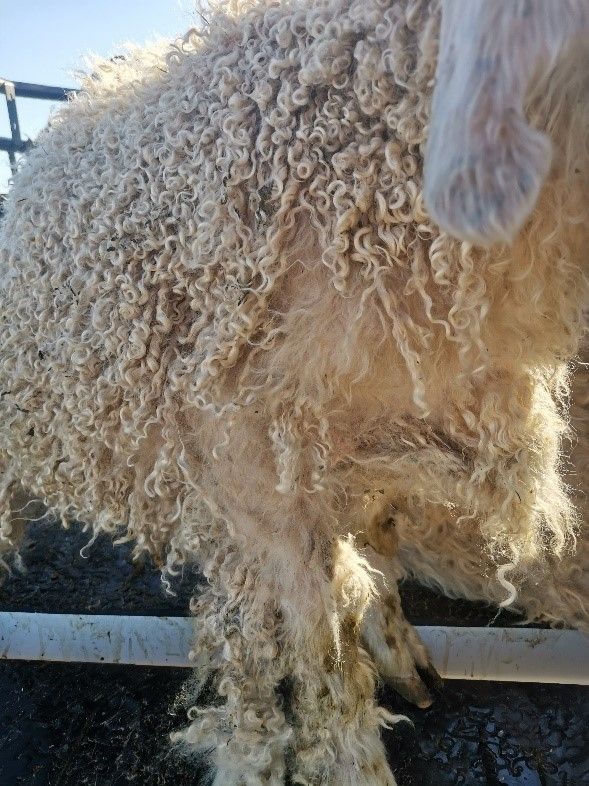 Above photo of hair loss due to ectoparasite hypersensitivity (red lice in this case). Biopsies taken from this goat confirmed the diagnosis.

DOES NOT affect Angora goats. Angora goats must however be considered to be potential mechanical vector in the same way clothing, vehicles and shears may introduce the mite to a farm and hence the importance of bio-security. Trials (Meinties, Fourie, Horak) demonstrated that Angora and Boer goats do not develop lesions from sheep scab mites and did not harbour the mites

This has been reported in goats (D caprae), in which it causes non-pruritic papules and nodules in goats, especially over the face, neck, shoulders, and sides. The nodules contain a thick, waxy, grayish material that can be easily expressed.

Chorioptes caprae can occur in goats. Papules and crusts are seen on the feet and legs.

b) Ringworm in Goats ‘omlope’

Ringworm is a fungal infection. Affected goats generally lose hair in circular patches on the neck, ears and face. Ringworm is usually itchy. It is very easily transmitted by contact and mechanical vectors.