Abscess formation in Angora goats is not an uncommon finding.

The infection that causes the abscess must come through a break in the defence system usually through the skin or mucosa.

What are the offending bacteria?

The most common causes of the abscess formation are: 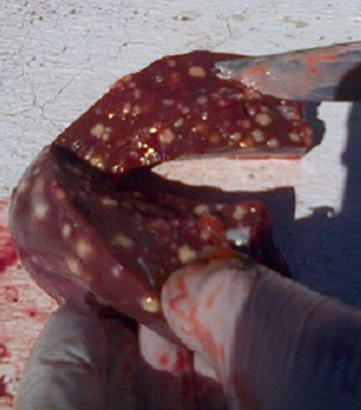 Abscess formation can however be caused by a number of bacteria such as Escherichia coli (E.coli) derived from the umbilicus or gastro-intestinal tract. Photo of a liver where angora goat rams on concentrate feed developed multiple liver abscess.

(photo cut section of the liver demonstrating the abscess’).

Abscess formation may take as long as 25-140 days (Cornebactrium) to develop. There are no obvious clinical signs but goats with large number of abscess will show weight loss and weakness

Corynebacterium - thick semi-fluid yellow-white to green-white pus is formed. Chronic abscess are surrounded by a well-developed capsule which can lead to an onion ring appearance.

Actinomyces – abscess is soft when compared to Corynebacterium and develop rapidly and the capsule is not as developed. The pus is usually green-yellow or greyish.

C.pseudotuberculosis usually occurs in lymph nodes which drain the area of penetration. 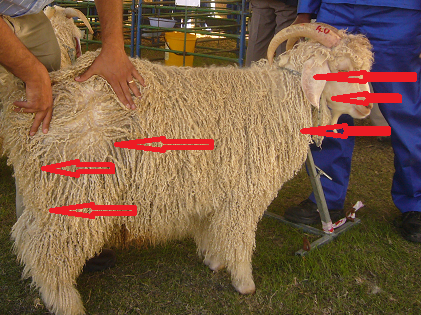 Sites of the common lymph nodes where Corynebacterium abscess may be seen.

The different bacterial abscess can be determined by bacterial culture.

The abscesses are also called caseous lymphadenitis or cheesy gland and is characterised by abscess formation in one or more glands but can in rare cases cause pneumonia, hepatitis, mastitis, orchitis, arthritis and perinatal deaths.

The bacteria can survive on floors for 10 days and for months and even more than a year in debris of hay or bedding. The organism can survive in dipping fluids for over a day.

Actinomyces is normally found on the mucosal surface of healthy animals. Damage to tissue is required to establish infections. Abscess may occur in nearly every organ. Most commonly form abscess in:

It is important to ensure that there is no environmental contamination of sheds, pens, kraals, dipping tanks or clothing from contaminated faeces or discharge from abscesses.

Even inhalation may lead to lung abscess and ingestion of infected material has been reported to be the cause of mandibular abscess in goats.

Do not contaminate the environment when lancing and flushing superficial abscesses.

In valuable goats the abscess can be removed surgically or lanced.

It is important that infected material be burned. The effectiveness of antibiotics is limited due to the capsule surrounding the abscess and the fact that the bacteria (Corynebactrium) are intracellular.

Vaccination should only be considered when all attempts have been made to rule out the predisposing factors. Vaccination will not cure the problem but help reduce the occurrence.

Out of interest see the trial in the control of food abscess at. https://www.angoras.co.za/page/foot-abscess-sweerklou-trial#133