Impact of Shearing on Reproduction
By Dr Mackie Hobson

Shearing Angora goat ewes at different times may impact on the fertility and kid survival rate.

Shearing prior to pregnancy

Shearing causes a rapid increase in plasma cortisol concentrations. Stress before mating can result in a delay in the onset of oestrus and a reduction in ovulation rates.

Stressors, even common management procedures such as shearing suppress normal oestrus behaviour and reduce ewe fertility. All these events are co-ordinated by endocrine interactions, which are disrupted in stressful situations. This disruption is short lived when conditions return to normal after shearing.

It would in theory be expected that shearing would stimulate the metabolic rate, feed intake and thus increased ovulation (flush effect). However shearing sheep ewes prior to mating tended to improve lamb birth weight by 0.31kg and increased weaning weight by 2kg but had no effect on number of lambs reared per ewe joined.

The majority of prenatal mortality occurs in embryos and not in foetuses (during the interval from fertilization to attachment). About 20‑30% of all fertilized ova in sheep ewes are lost in the first month and very few losses occur after about day 35. Ewes return to oestrus after 16‑18 days (sheep) 19-21 days (goats) after the loss.

It is therefore advised not to stress ewes immediately after mating prior to implantation of the ovum as this is a sensitive time.

Shearing during mid-pregnancy can be used to improve productivity and reduce perinatal mortality of kids.

Studies on sheep have demonstrated the effect of shearing at about 74 days of pregnancy resulted in:

It is well known that the birth weight of Angora goat kids effects survival rates.

Birth weight of the kid 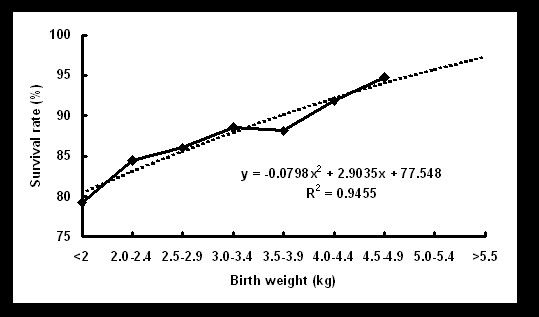 The nutritional requirements of the Angora ewe increase dramatically between days 90-150 of pregnancy. The impact of nutrition over this period has significant impact on birth weight, udder development, colostrum and milk production and mothering instincts. Poor milk production of the dam accounts for 8.7% cause of kid deaths. Shearing Angora goats increases the metabolic rate as well as increasing food and water intake so is the reason for the increased kid birth weight.

Shearing during gestation alters the metabolism and the placenta of ewes and increases lamb survival rate by up to 17% due to increasing the weight at birth.

It has been suggested the best time for shearing ewes (sheep) in order to obtain the higher placenta development in ewes is around 74 days of pregnancy. A probable explanation for the effect of shearing is the stimulus for a greater food intake by the sheep exposed to cold temperature

Better milk yield has been observed in sheep sheared at 100 days of pregnancy compared to non-sheared sheep.

Shorn Angora ewes (shorter hair) also tend to seek shelter during periods of cold and so may increase the survival rate of kids born in the veld due to an improved microclimate.

The pros and cons must be taken into consideration when planning shearing dates considering the impact on birth mass, ovulation, environmental temperatures (hypothermia) and farm management.

The importance of feeding pregnant ewes during shearing

Goat ewes are much more susceptible to nutritionally related abortions (1-5 days after the nutritional stress) than sheep. This is why it is important not to starve Angora goat ewes during shearing time. In an Angora ewe which is energy deficient:

Effects of stress on reproduction in ewes.

Effect of shearing on oestrus and ovulation in sheep