Why is testicle size important?

The importance of testicle size/weight can be demonstrated in the two examples below. How many ewes can a ram cover? Keep in mind that on average that each ewe in heat is mated about 3 times).

What other factors affect the quality and quantity of sperm?

Bucks’ age, body weight and body condition score were found to be positively correlated with ejaculate volume, semen density, total sperm (A. K. Rajuana, M. R. Tayabur, M. A. Hoque, S. S. Husain and Z. Sultana) and percentage of normal sperm, which were in agreement with the findings of Colas (1976).

Is it justified selecting for testicle size?

When we want to select for a particular trait in the Angora goat we need to know the heritability of the trait to determine the value of selecting for this trait.

The heritability of testicle size in the Angora goat has not been determined but it has been proven in sheep breeds to be high: 0.35 in sheep (Sheep Production 2002 edition, Volume 7)

How does a heritability of 0.35 (35%) for testicle traits compare to other traits of known heritability in Angora goats.

Is our current selection for testicle size adequate?

There are no current significant problems with fertility of our Angora goat rams but we must avoid introducing a fertility problem over the coming decades.

How do we currently select for testicle traits?

Although there is no objective measurement (no breed standard) the classing is done on experience and relative comparison to other rams in the group.

To answer these questions we have had a look at Angora Ram testicular data collected over the last 3 years (2015-2018).

The different colours represent the Graaff-Reinet and Jansenville Veld Ram testicle circumference over the different years in the graph below. 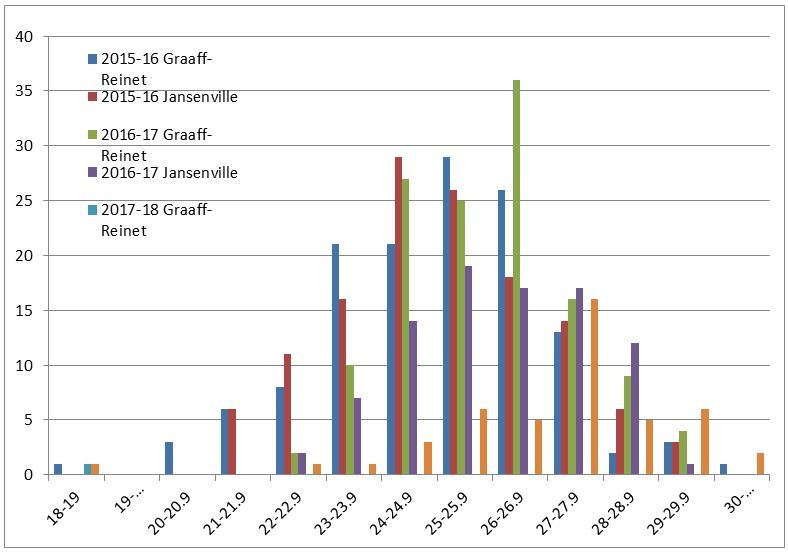 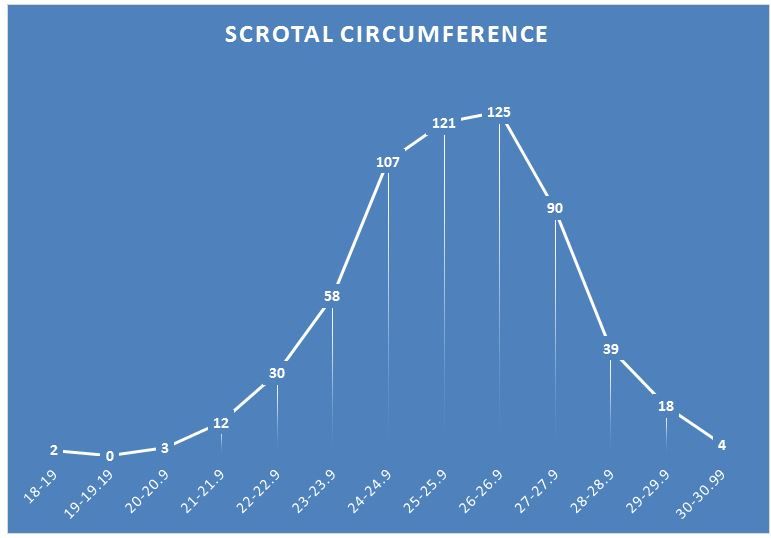 The effect of nutrition on scrotal size (graph below)

The blue line of the fed ram sales can be compared to the testicle size of the veld ram sale.

With any population data curve we expect to see the normal bell shaped with the standard deviation from the median as in the graph below.

With added nutrition as in the fed ram sales in the previous graph we get:

What can we conclude from this?

Culling rams on weight at final selection - are we not removing the smallest tesicles anyway?

To answer this we have to look at what has happened over the last 3 years.

If for example we decided that as a ram buyer we would not want to buy a ram with testicles smaller than 23 cm. That is the bottom 1-7% of all rams (n=609).

If we culled on weight how many of these rams with small testicles would not get onto the sale anyway? -so not of any concern?

This is happening due to the HIGH heritability of testicle trailts.

What is the future of testicle measurements?

It has been proved that each gram/volume of testicle increases the number of sperm produced.

Testicle traits are highly heritable. Therefore selection for scrotal circumference may over many decades lead to ‘round testicles’ where ultimately it is volume of testicle that we need be selecting for.

For this reason Dr Johan Van Rooyen at Grootfontein Agricultural college worked out the most accurate way of determining testicular volume (using cylinder and sphere clculations). It is easy eanough to measure the scrotal circumference and lenth and plug these values into the formula to get the testicular volume.

By plotting the circumferences and lengths and formulating a table for Angora goats.

Split scrotums are a highly heritable trait. So much so that when collecting the data over the last 3 years that I could with >90% certainty say which studs some the goat rams originated from just by checking the scrotum.

Split scrotums are undesirable because of the:

There has however been NO scientific paper written to suggest a split scrotum causes any reduction in fertility.  Most sheep breeds as well as the USA Angora goat have a breed standard which varies from under 3cm to having a split of less than 1/3 the length of the testicle. 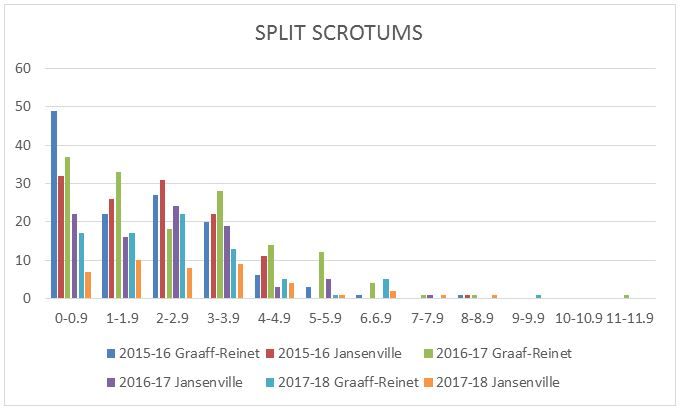 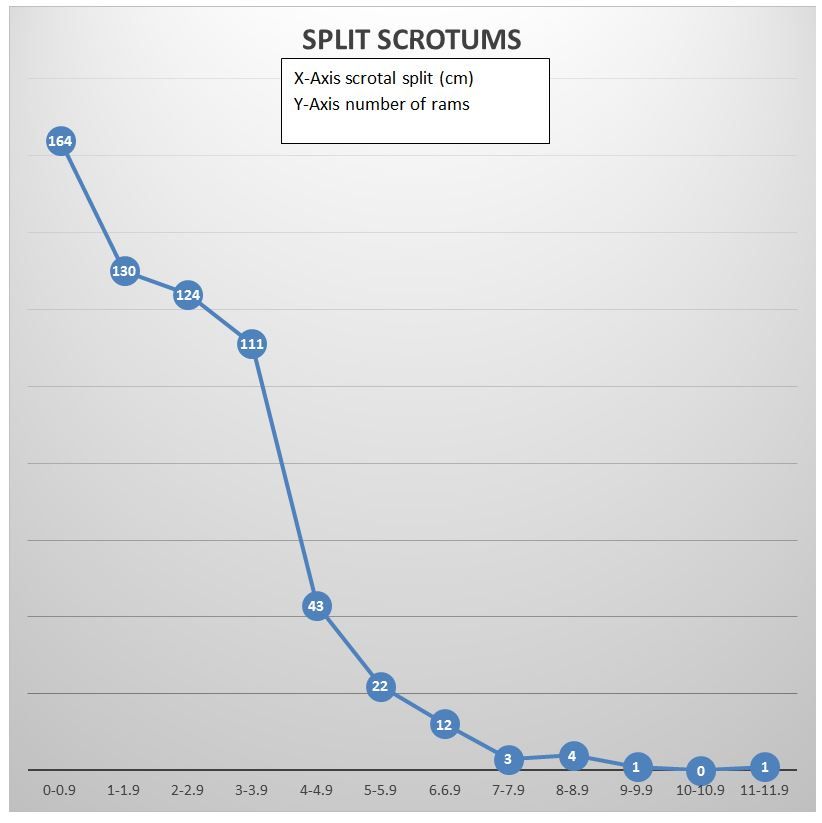