Lice can have a big impact on both the quantity and quality of mohair. A study (Grootfontein-Brown et al 2005) showed that treated Angora goats produced 271g (2.12kg Vs 1.85kg) more hair than untreated goats. It is thought that the lice irritation causes the skin to thicken and effect the skin structure so reduce hair produced as well as the physical loss of hair through damage by scratching. The fibres are weakened, lack lustre, and become matted, tangled, and discoloured.

The number of products licenced to treat both red and blue lice in Angora goats is limited. The export of Mohair to Europe is regulated by strict residue criteria which also reduces the number of drugs we can use.

Many producers have used off-label treatments, but how well and for how long do they work?

Thanks to Lloyd Cruikshank and his staff for hosting the field study. Thanks also to Steven Wright for assisting with the lice counts.

What Off-label treatments did we use in the field study?

Thanks to Androvet, Afrivet, Ascendis, Boehringer and Zoetis for donating products for the study. 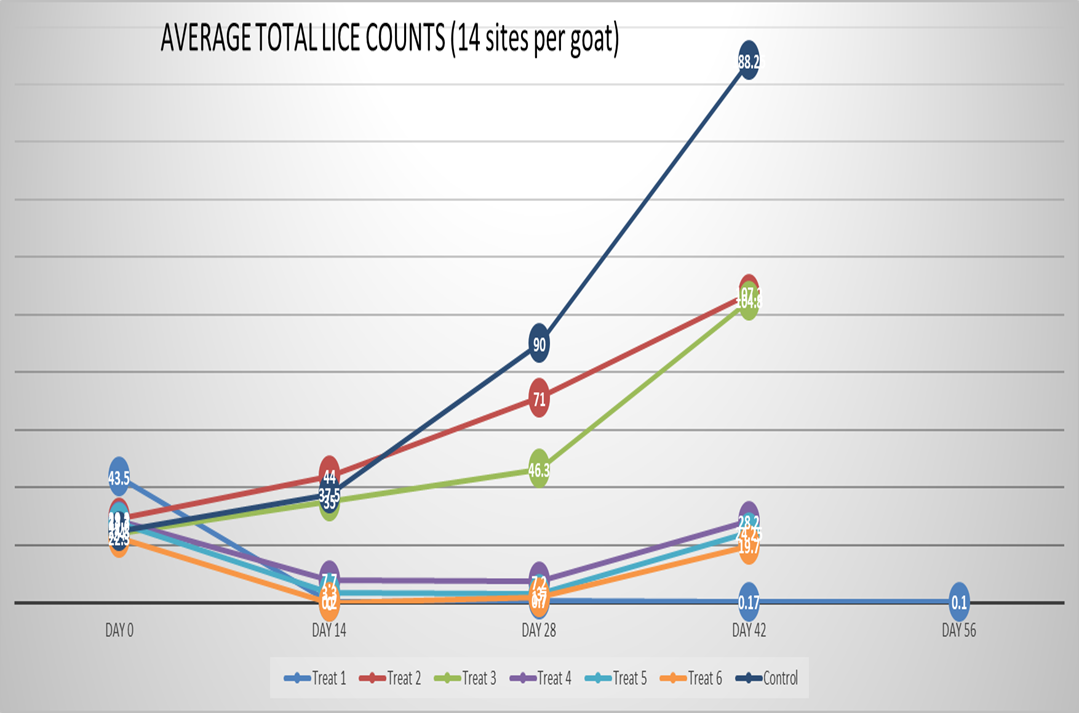 Treat 1 (Blue line) The dip combination of Ivermectin, Novauloron  + Amitraz (Expel Plus + Supatraz) was the most effective treatment both in effectiveness and duration. Even after 56 days, the goats remained free of lice.

Treatment 6 (Orange line) Fipronil, Abamectin (Maximus) Androvet. The goats were kept effectively lice free with Lice returning by day 42. These actives are the same as found in Attila were in that study lice returned after day 56. See previous study on Attila (Ascendis) https://www.angoras.co.za/article/fipronil-abamectin-atilla

If we look at the two drugs Fipronil and Abamectin contained in Maximus and Attila as individual treatments below.(Moxidectin/Abamectin both ivermectin family).

Treatment 4 (purple line) Moxidectin (Cydectin) Zoetis. The lice counts dropped significantly (not totally ‘clean’) and was very slightly less effective than the Fipronil on its own or and the combination of Fipronil + Abamectin.

Not effective in treating lice:

Flumethrin (Maxipor) and Amitraz (Supatraz cattle pour-on) although had some impact on the lice was they were not effective treatments. Interestingly the amitraz as a pour-on had slightly more of an effect than Flumethrin when compared to the Control. 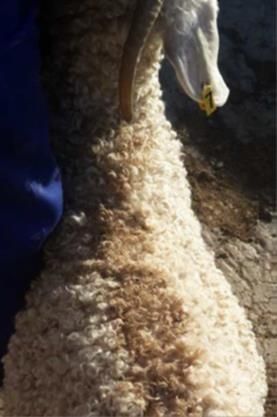 Due to the effect of pour-on products being slightly greasy and effecting the hair (photo above) the applications were administered on the bare skin of the axilla (armpits). We know from previous trials that this area of application is just as effective along the back. 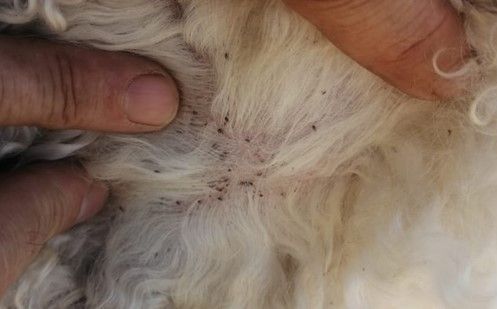 Although lice tend to be host-specific Ligognathus Africanus (blue lice) infests sheep and Angora goats. The red lice Damalinia caprae/limbata differ from the red lice of sheep Damalinia ovis and have a preference for Angora goats.

Lice spend their entire life on the goat with female lice glueing eggs on the hair close to the skin. These eggs hatch in 1 to 2 weeks (9 to 18 days). The entire life cycle of a goat from the time the eggs laid until maturity is 14 to 75 days. The adult lice usually live for about a month. Lice can only live for 36 hours off the goat.

Why do some treatments not work as well as others?

Producers often complain about how quickly the flock is re-infested. Drug resistance can be a factor but in many cases the fact that most re-infestation occurs because the pesticides do not kill the eggs. These eggs hatch and the lice are seen to be back on the goat when checked again within 9-18 days! You will see when reading the label that treatments that do not kill the eggs usually advise repeating the treatment within 14 days.

Because blue lice don’t move around in the fleece as much as red lice do, it is thought pour-on remedies don’t work as well for blue lice as they do for red lice. Blue suck blood while red lice feed off dead skin and secretions the way the drug is carried through the body influences its effectiveness.

Some of the current treatments (Dips, Pour on and injectable) available to treat lice can be seen by following the link https://www.angoras.co.za/article/ectoparasite-treatment-guidelines#357

How can farmers reduce resistance to pesticides by lice?