PREPARATION OF RAMS FOR SEMEN COLLECTION

Preparation of rams for semen collection for freezing should start at least eight weeks beforehand to ensure optimum spermatozoa production during collection.

Good nutrition with Zinc, Selenium, Vitamin E and Vitamin A supplementation is essential during the pre-collection period. Rams should be fed this diet at 2-3% of their body weight. Lucerne hay should also be provided at 500 g/ram/day.

Rams should be exercised daily. The aim is to have rams in a body condition (BCS) score between 3 and 4 out of 5. The rams could be exposed to mature synchronised ewes for four weeks before semen collection. Photoperiod plays a role in the quality and quantity of spermatozoa produced. Therefore, the normal autumn breeding season for Angora goats is preferable.

PREPARATION OF EWES BEFORE ARTIFICIAL INSEMINATION

Ewes should have a body condition score (BCS) of at least 2.5 on a scale-out of 5, six weeks before artificial insemination. From six weeks before the date of artificial insemination, ewes need to be on a rising plane of nutrition, and the BCS should increase. On natural pasture of the Karoo and Eastern Cape, ewes should receive 200 to 500 grams of a production lick daily, depending on the BCS at the start of the program. Good quality roughage must be available at all times.

For an artificial insemination program, it is preferable to use ewes that have kidded at least once and to avoid using ewes older than 7 years of age 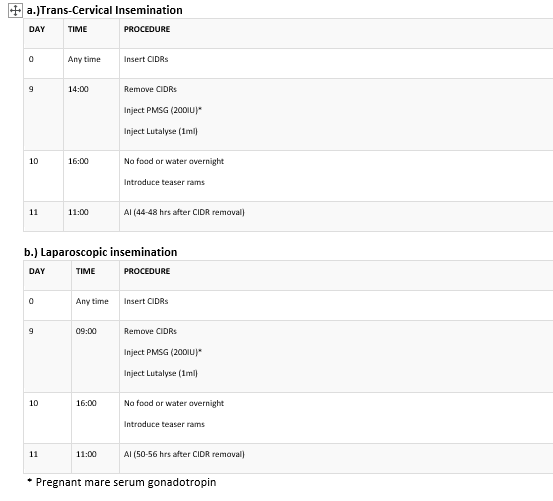 Semen was frozen according to various protocols in either pellets or straws. Post-thaw motility rates above 50% can be achieved with the straw-freezing protocols followed since 2013.

It is well known that there is a large variation in semen quality traits and freezability among individuals.

In general, trans-cervical insemination with either fresh or frozen semen did not yield acceptable results. Although laparoscopic insemination with frozen-thawed semen produced better results than with fresh semen, variable results were obtained in the different years. As far as specific aspects are concerned, from the results of the 2016-trial at Grootfontein, it is clear that the shorter 9-day synchronisation cycle yielded better conception results when using CIDRs in Angora goats than the longer 17-day cycle.

Results indicate that it is possible to obtain acceptable conception rates with laparoscopic insemination with frozen-thawed semen when following the prescribed protocols.

The results obtained with the current study are slightly lower than those reported in the literature for goats and sheep.

The quality of fresh semen of Angora rams should not pose a problem during the freezing process of semen. However, differences among rams do exist. A workable protocol for the freezing of semen in straws is available that can yield acceptable conception rates with laparoscopic insemination. It should be kept in mind that the preparation and management of the ewes play an important role in the success of this protocol.

Wide variation in conception rates was achieved with frozen-thawed semen during these trials. Results varied from excellent to poor. Further research and trials should focus on eliminating this variation Timing of ovulation, failure of fertilisation, or incorrect insemination dose could be factors contributing to the variation observed and should be investigated.