Angora goat farmers wean the kids at slightly different times depending on the environmental conditions (drought) and management system.

A balance needs to be made by the producer between the impact of weaning on the kids and allowing the ewes to recover to be in a good enough condition to conceive at the following mating.

What does the milk production of the Angora ewe tell us about weaning?

If we read Hoon, Olivier and Griessel on milk production by ewes on the veld (2003-2006, Middleburg district).

If we look at the graph in relation to milk production relative to time (weeks): 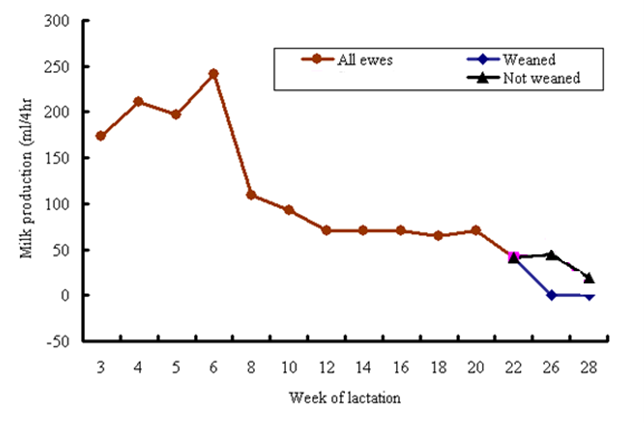 How early can we wean our kids under drought conditions?

From the graph of the Angora ewe’s milk production, we can see:

What are normal weaning weights?

What is the impact of weaning on Angora kids? WEANING SHOCK

Kids who are weaned lose weight or do not progress due to “weaning shock” and under normal Karoo conditions cannot recover sufficiently, as demonstrated in the graph. 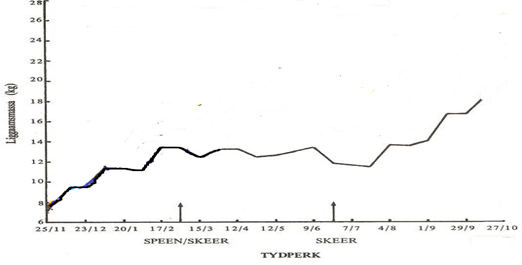 The effect of weaning shock can be demonstrated from extracts from studies by Gretha Snyman (Grootfontein) on 4 to 7-month-old kids.

Even where kids are given feed supplements, the impact of weaning stress on growth rates is marked.

The experiment was repeated under veld conditions. As a result of good rains before the commencement of the experiment, the veld was in above-average condition during the period of the experiment. The ADI was calculated from weaning (4 months) to 7 months old.

The practice of swopping ewes or running with older goats to decrease stress during weaning has a minimal benefit as these kids had ADI of 12,4g compared to 10,2g where no adults were present.

How to reduce weaning stress?

This should ideally be started before the kids (creep feed) are removed from the ewes so that they have already adapted to the diet. This should be for a minimum of 2 weeks before weaning.

During times of drought, the availability of feed may determine what creep feed is provided.

Examples of a creep feed:

Expectations on this ration would be that the Average Daily Gains (ADG) would be:

Expectations of ADG would be:

Analysis(Dry Matter) of this ration would likely be:

What impact does weaning have on the ewe?

Studies by Hoon, Olivier and Griessel evaluated the body weight change and conception rates of ewes from weaning (4months) until mating/scanning.of ewes in the next breeding season. These studies were of ewes on veld conditions (above average) in the Middleburg district from about 2003-2006.

What is surprising from these studies was the fact that weaning/not weaning, under good veld conditions, did not have a significant impact on ewe production figures, but we know it has a considerable impact on the kids.

It is clear that keeping the kids with the ewe for as long as possible has a large benefit to the kid and no significant impact on the ewe when conditions are good.

However, under drought conditions for early weaning, producers must ensure good nutrition, reduce stress, keep the kids free of parasites, and ensure they are fully vaccinated.